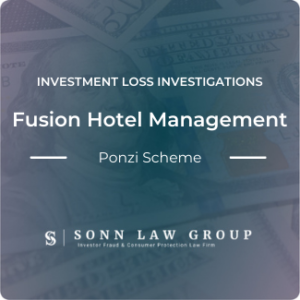 The SEC alleged that from at least January of 2016 through January of 2020, Bhakta and the Fusion entities raised funds from investors by falsely telling them that Fusion was in the business of buying blocks of hotel room reservations from major hotel chains and re-selling those reservations at higher rates to Fusion’s clients, including a major airline company. Bhakta allegedly touted Fusion’s successful track record to entice investors, despite the fact that Fusion’s business was a sham.

Despite their assertions to investors, Fusion did not engage in the business of re-selling blocks of hotel room reservations for profit, and the contracts and bank statements Bhakta provided to investors to lend credibility to that business were fabricated. Instead of using the investor funds to buy and sell reservations as promised, Bhatka misappropriated the funds for gambling and other personal expenses.

The SEC’s complaint charges Fusion Hotel Management, Fusion Hospitality Corporation and Bhakta with violating the antifraud provisions of Section 17(a) of the Securities Act of 1933 and Section 10(b) of the Securities and Exchange Act of 1934, Rule 10b-5 thereunder. The complaint seeks permanent injunctions, disgorgement with prejudgment interest, and civil penalties against all of the defendants.

The Sonn Law Group is currently investigating allegations surrounding Denny T. Bhakta. We represent investors in claims against negligent brokers and brokerage firms. If you or your loved one experienced investment losses, we are here to help. For a free consultation, please call us now at 866-827-3202 or complete our contact form.