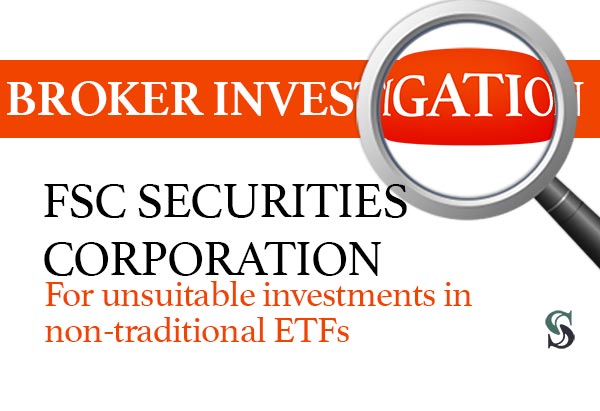 According to FINRA AWC letter number 2010024620303, accepted by FINRA in August 2017, FSC executed thousands of purchases of leveraged, or inverse, or both inverse and leveraged Exchange-Traded Funds (collectively, “Non-Traditional ETFs”) in approximately 1,400 retail customer accounts.

Exchange Traded Funds (ETFs) are complex products that have been largely misunderstood by financial representatives. The general consensus is that inverse ETFs and leveraged ETFs are not suitable for clients because they are only good for a one day investment, and should not be held long term.

Overview of the Recent Allegations Against FSC Securities Coporation

From January 2009 through November 2009, FSC allowed registered representatives to recommend Non-Traditional ETFs without establishing a reasonable supervisory system or written supervisory procedures specifically addressing these products. While the Firm prohibited the offering of certain kinds of Non-Traditional EIFs in December2009, it allowed the offering of other kinds of Non-Traditional EIFs to continue after that date without implementing a reasonable system and written procedures to supervise those offerings. Based on the foregoing, FSC violated NASD Rule 3010(a) and (b) and FINRA Rule 2010.

Also, during the Relevant Period, FSC, by and through its registered representatives, Recommended Non-Traditional ETFs to customers without fully understanding the features and risks associated with those products. FSC allowed its registered representatives to make unsuitable recommendations of Non-Traditional EIFs to many customers with conservative and moderate investment objectives and risk tolerances, some of whom were elderly. Moreover, many of those customers held the investments over extended periods of time and sustained losses of $492,485. Based on the foregoing, FSC violated NASD Rule 2310 and FINRA Rules 211 1 and 2010.

If you’ve invested and lost money because of unsuitable investments in ETFs recommended by your advisor at FSC Securities Corporation, the securities fraud attorneys at the Sonn Law Group are interested in hearing from you. We invite you to contact us online to schedule a free review of your case.