The Sonn Law Group is investigating GPB Capital. If you or a family member experienced investment losses investing with GPB Capital, we want to discuss your case. Please contact us today for a free review of your case. 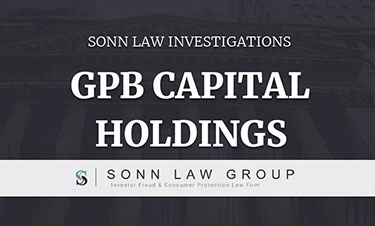 Fidelity Investments’ clearing and custody unit, National Financial Services, recently announced that they will at this point give its brokerage firm clients 90 days to remove all of their GPB private placements from its platform.

The announcement means that, within 30 days, investors and their financial advisors will have to move all of their GPB fund assets to a different firm.

The main reason for this order is that, reportedly, neither GPB nor National Financial have a clear value as to their GPB private placements.

According to an InvestmentNews article, a Fidelity spokesperson said that at the current time GPB is not meeting her firm’s policy regarding alternative investments.

GPB has been under criticism with regulators and investors, as well as a former partner.

Its private placement funds have plunged in value.  The GPB funds, once valued at almost $2B, are now worth approximately $1B.

According to InvestmentNews, investors have lost a reported $600,000 during this process, while brokers and their firms continued to earn commissions of $167M.

Over 60 broker-dealers, include Purshe Kaplan Sterling, Woodbury Financial Services, SagePoint Financial, and Royal Alliance Associates have sold GPB funds.  Reportedly questions are now being raised whether any of these firms knew about the private placements even as they were selling them to investors.

Last year, an ex-Purshe Kaplan Sterling employee accused her firm of firing her after she brought up concerns about how the broker-dealer went about approving alternative investments such as GPB holdings.

The U.S. Securities Exchange Commission (SEC) and the Financial Industry Regulatory Authority (FINRA), along with the Federal Bureau of Investigation, are currently investigating the 63 brokerage firms that sold GPB-controlled partnerships.

Former GPB operating partner Patrick Dibre is suing his ex-partners for lavish personal pending in the millions.  Dibre contends that GPB made efforts to conceal that the company was being run like a Ponzi scam.

The Sonn Law Group is currently investigating GPB Capital Holdings. We represent investors in claims against negligent broker and brokerage firms. If you or your loved one experienced investment losses, we are here to help. For a free consultation, please call us now 305-912-3000 at complete our contact form