The federal lawsuit filed in Austin, Texas filed an amendment for their prospective class lawsuit. 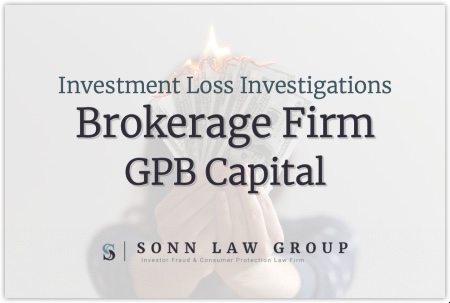 An investor originally filed the lawsuit in the US District Court of the Western District of Texas alleging violations of federal securities laws by GPB Capital, Ascendant Capital, and the Brokerage Firms.

In the amended prospective class action lawsuit that was recently filed, the investors claimed that, “astronomical fees and undisclosed conflicts of interest undermined buyers of GPB Capital private placements from the start.”

GPB Capital Holdings is a New York-based investment firm, created in 2013, that offers exempt, private-placement securities. These investments inherently have a high degree of risk due to their nature as unregistered securities offerings (and without regulatory oversight). The investment firm raised $1.8 billion from investors through private placements that invested in automotive dealerships, the waste management industry, and middle market lending. These investments were high risk and high commission (nearly 8%) private placements.

The amended class action, Kinnie MA IRA v. Ascend Capital, targets undisclosed conflicts of interest of two owners of GPB Capital, David Gentile and Jeffrey Schnieder. According to the complaint, Schnieder was also an owner of Ascendant capital, the broker-dealer that contacted other brokers to sell GPB private placements. Though this conflict should have been revealed to investors, it was not.

The complaint states, “Ascendant Capital, GPB’s primary distribution agent, and GPB itself, were both controlled by their principals, David Gentile and Jeffrey Schnieder. However, neither GPB nor Ascendant, nor their principals, made disclosure of this co-ownership and common control to investors in offering materials for the securities.”

The complaint alleged that the failure to disclose this obvious conflict of interest, that the issuers of GPB securities and the independent agent purporting to sell these securities were controlled by common parties, made the offering of the GPB securities illegal.

Additionally, the complaint alleges that although investors had been pitched yields of 8% and an internal rate of return for each GPB investment of 15%, they were charged extraordinary fees of between 16% and 20%.

GPB’s “investment strategy” was bound to fail because of the astronomical fees which were not accurately disclosed to the investors, according to the complaint.