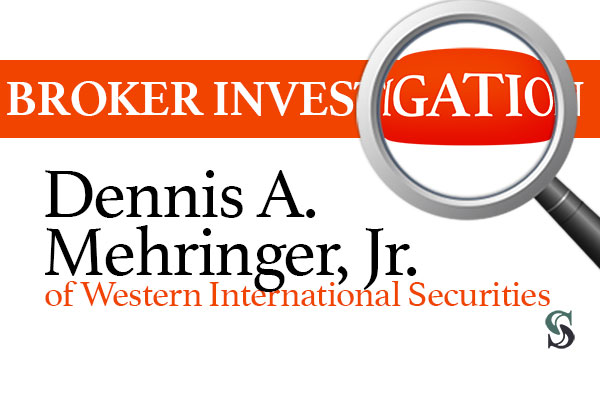 The Sonn Law Group is investigating claims related to California-based broker Dennis A. Mehringer, Jr. (FINRA CRD#: 722569) and employed by of Western International Securities. Mr. Mehringer was recently named a respondent in a FINRA complaint.

The complaint submits that Mehringer made unsuitable recommendations that caused a customer to engage in excessively expensive short-term trading. The complaint further alleges that Mehringer failed to fulfill his fiduciary obligations to a charitable trust he had helped create when, as trustee, he violated the purported charitable purposes of the trust.

Did you suffer significant investment losses while working with Dennis A. Mehringer, Jr., a broker employed by Western International Securities? If you invested money through Mr. Mehringer and suffered a loss, there may be options for recovering your losses. Contact the Sonn Law Group today.

Here are the complete details of the most recent FINRA complaint against Dennis A. Mehringer, Jr. on its website:

Mehringer was named a respondent in a FINRA complaint alleging that he made unsuitable recommendations that caused a customer to engage in excessively expensive short-term trading and intra-day switching of mutual fund Class A shares. The complaint alleges that Mehringer repeatedly recommended, and caused the customer to engage in, short-term purchases and sales of 84 mutual fund Class A positions (involving the sale of shares within a year of purchasing them) in five of the customer’s accounts. In 47 of the 84 purchase transactions, the customer paid front-end sales loads ranging from four to five percent. All but 17 of these 84 mutual fund positions were held for less than six months, and approximately 35 of them were held for less than three months.

Five were held for less than one week. Mehringer received $169,735 in commissions from the transactions. Mehringer recommended the short-term mutual fund trading and the intra-day mutual fund switching alleged above without reasonable grounds to believe that the recommendations were suitable for the customer in light of the frequency and nature of the transactions, including the associated sales loads, based on the customer’s investment objectives. Given the long-term nature of Class A mutual fund share investments, along with the sales loads incurred in connection with frequent trading and switching between the relevant mutual funds and mutual fund families, Mehringer’s short-term trading and switching was also unsuitable for any customer.

The complaint also alleges that Mehringer exercised discretion in the same customer’s accounts without obtaining the customer’s written authorization and his member firm’s approval to do so. The complaint further alleges that Mehringer failed to fulfill his fiduciary obligations to a charitable trust he had helped create when, as trustee, he violated the purported charitable purposes of the trust.

Mehringer also endangered the favorable tax treatment for donations to the trust, temporarily held trust assets in his own name, and made a risky investment of trust assets without conducting due diligence or taking reasonable steps to protect those assets, and without putting the invested funds into escrow or documenting the investment. Generally, Mehringer breached his fiduciary obligation to the trust by establishing it in such a manner as to give himself potential ownership of the trust’s assets and by failing to ensure that it would fulfill its purported charitable purposes of funding scholarships and educational expenses for underprivileged children at private schools.

Furthermore, the complaint alleges that Mehringer submitted false responses to his firm in an annual compliance questionnaire about the complaint and settlement.

I vigorously dispute all allegations of wrongdoing referenced in the complaint and believe them to be wholly unfounded. I intend to vigorously defend myself against all of the claims.

If you’re a current or former client of Dennis A. Mehringer, Jr. we want to hear from you. Please contact us today for a free case review.