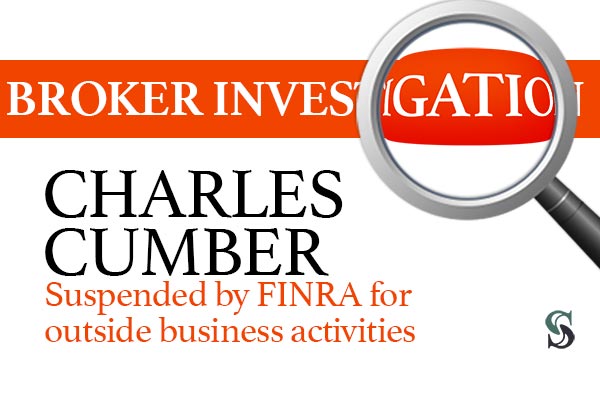 Mr. Cumber was fired by Wells Fargo in February after failing to timely disclose outside activities and financial disclosures. Then in late September, Charles Cumber was suspended by FINRA for four months, in addition to being fined $7,500, for engaging in outside business activities without properly reporting said activity, a violation of FINRA Rule 3270.

Below is the full text of the allegations by FINRA from Mr. Cumber’s BrokerCheck profile:

Without admitting or denying the findings, Cumber consented to the sanctions and to the entry of findings that he conducted insurance sales through a limited liability company he formed and he did not disclose any of the insurance business, residual commissions, or the existence of the company to his member firm. The findings stated that Cumber falsely attested to the firm that he was not involved in any outside business activities and repeatedly acknowledged his understanding that the receipt of residual commissions should be disclosed to the firm through an outside business activity disclosure. On two occasions, Cumber also explicitly agreed that he would not sell insurance products for any entity other than the firm without prior notice and approval. The findings also stated that Cumber engaged in 24 equity-indexed annuity sales to 20 individuals (13 of whom were the firm’s customers). The sales totaled approximately $2.63 million, and Cumber earned approximately $125,000 in commissions from the associated insurance company. Also, Cumber received approximately $27,000 in trailing compensation in connection with previous sales of insurance products. These payments were received by Cumber’s entity, the company. While associated with the firm, Cumber received approximately $345,000 in payments from the insurance company for sales of equity-indexed annuities and other insurance products.

If you’ve ever invested money with Charles Cumber or his employers, the securities fraud attorneys at the Sonn Law Group are interested in speaking with you. Contact us online or by phone at 305.912.3000 for a free consultation.