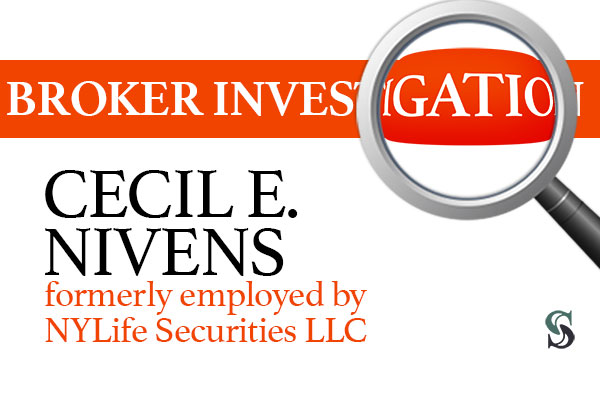 Currently, the experienced securities fraud lawyers at the Sonn Law Group are investigating all allegations and claims against Mr. Nivens. If you have lost money working with this individual, our attorneys can help you seek financial compensation.

The Allegations Against Cecil E. Nivens

Mr. Nivens was employed at NYLife Securities LLC from 1991 until 2014. The relevant period of the newest allegations brought by FINRA regulators extends from February 2012 through April 2013. It was during this time that investigators believe that Mr. Nivens committed serious professional malpractice. Specifically, within this time period, Mr. Nivens recommended that several of his clients purchase variable universal life insurance policies, also known as VULs.

To make these purchases, he recommended that they use the proceeds of annuities that they already owned. A variable life insurance policy is a complex financial product that essentially combines certain features of insurance and of an investment. Notably, this product also offers certain tax benefits to the buyers.

However, according to the allegations, Mr. Nivens failed to properly document and process his client’s purchases of their VUL policies. As such, his clients were not able to qualify their purchases as 1035 exchanges. Section 1035 of the Internal Revenue Code (IRC) allows people to transfer funds from one life insurance policy or annuity to a brand new policy, without incurring a tax penalty.

Unfortunately, due to the fact that Mr. Nivens failed to follow the proper protocols, as was expressly required by his employer, his customers were hit with substantial tax charges. Additionally, investigators believe that Mr. Nivens provided false information on documents to his employer.

Prior to his departure from NYLife Securities in 2014, Mr. Nivens was also subject to several other customer complaints, unrelated to the VUL issues. Indeed, multiple complaints were settled by his employer and substantial damages were paid out to affected customers. Some examples include:

At the Sonn Law Group, we have helped many investment fraud victims recover full and fair compensation for their damages. If you lost money working with Cecil E. Nivens, please reach out to our team today. From our main office in Aventura, FL, we represent investors throughout the United States and around the world.