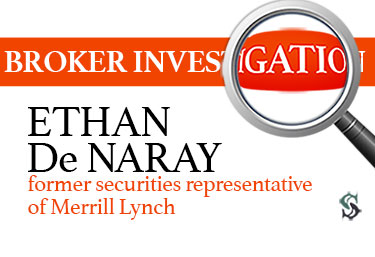 On May 19th, 2017, Ethan De Naray was terminated from his position at Merrill Lynch after allegations arose that he allegedly made unauthorized trades in a customer’s non-discretionary trading account. All information contained within this post comes directly from Mr. De Naray’s official BrokerCheck report.

There are two disclosures on the FINRA record of Ethan De Naray. The most recent pertains to his termination at Merrill Lynch. According to the brokerage firm, Mr. De Naray improperly exercised discretion in a non-discretionary trading account. In effect, this means he executed an unauthorized transaction. With non-discretionary brokerage accounts, investment advisors must always get the customer’s approval for each individual transaction.

In addition to the unauthorized transactions, Mr. De Naray is also alleged to have incorrectly marked certain trades as unsolicited when they were actually solicited. Registered brokers have a professional duty to make sure that they are recording accurate records pertaining to all trading activities.

At Sonn Law Group, our legal team is committed to advocating for investor rights. If you or one of your family members has sustained significant investment losses, you may be entitled to financial compensation. For a free, no obligation consultation, please contact our law firm today.