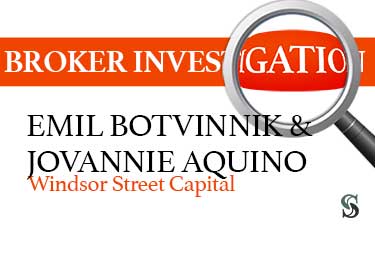 On September 7th, 2018, the Securities and Exchange Commission (SEC) charged Emil Botvinnik (CRD#: 4359481) and Jovannie Aquino (CRD#: 4876661) with securities fraud. The charges, which were filed in the United States District Court for the Southern District of New York, allege that these brokers churned (excessively traded) the accounts of retail customers.

The SEC filed two separate legal complaints in this case. While both brokers were associated with the same brokerage firm when the misconduct occurred, it took place over two different times periods and at different branch offices.

From June of 2012 to November of 2014, Emil Botvinnik was employed at Meyers Associates L.P. in Miami Beach, Florida. During that time, federal regulators allege that Mr. Botvinnik defrauded at least five different customers through the churning of their accounts. In all, his alleged fraud is believed to have resulted in nearly $2.8 million in losses for investors as well as $3.7 million in ‘ill-gotten gains’ for himself.

At Sonn Law Group, our law firm is passionate about protecting the rights of investors. If you sustained significant investments losses due to churning or any other type of broker misconduct, we can help. Contact us today for a free review of your claim.