The Louisville Courier Journal reports that ex-Merrill Lynch broker Chris Hibbard is facing charges in federal court over his alleged role in a decade-long $4.4 million fraud scheme. If you have ever invested with Mr. Hibbard, we want to hear your story. 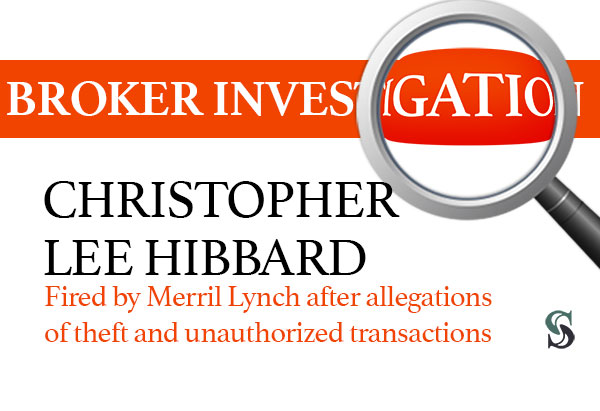 According to reporting from the Louisville Courier Journal, former Merrill Lynch broker Christopher Lee Hibbard has been indicted in federal court for his role in perpetuating a $4.4 million investment fraud scheme.

On November 8th, 2018, in a federal court in Western Kentucky, Mr. Hibbard was charged with wire fraud and investment advisor fraud. If convicted on these charges, the former broker could face up to 20 years in prison and up to $250,000 in fines

In May of 2018, Mr. Hibbard was barred by FINRA after he failed to cooperate with the regulatory agency’s investigation into the fraud allegations that were raised him. Since he was terminated by Merrill Lynch earlier this year, nine different investors have already filed complaints against this broker. With one exception, these complaints are all still pending.

Prosecutors believe that Mr. Hibbard outright stole money from his clients. He is alleged to have made many unauthorized trades and unauthorized withdrawals from his customer’s brokerage accounts. BrokerCheck records indicate that the allegations against Mr. Hibbard extend from 2010 to early 2018 — when he was finally terminated by Merrill Lynch.

The information below was published in March of 2018:

According to reports, Louisville, Ky based broker Christopher Hibbard (Broker CRD# 3176484) has been fired by his employer Merrill Lynch after a client complaint led to an investigation which revealed that Mr. Hibbard had committed fraud, stealing from client accounts and making unauthorized transactions.

“These are very serious allegations, and Merrill Lynch will be responsible for every penny he allegedly stole, in my opinion”, said attorney Jeffrey Sonn, a 30 year veteran of securities fraud law and founder of the Sonn Law Group.

Below is the complete details from the original report on AdvisorHub.com:

Hibbard worked at Merrill for seven-and-a-half years prior to being terminated on January 8, 2018. He has worked in the securities industry for over 19 years according to his public profile on BrokerCheck.

“We promptly notified the appropriate authorities and are cooperating with their investigations,” Halldin wrote.

He added that the unidentified client who lost money will be reimbursed, consistent with corporate policy. The client complaint involved a money-market fund and a variable annuity, and is “pending,” according to BrokerCheck.

Halldin declined to comment on the alleged amount of the client’s loss, the size of Hibbard’s practice or whether the firm or its managers are being investigated over supervisory lapses.

The SEC would not comment on whether it is taking action against Hibbard. He started at A.G. Edwards in April 1999, joined Morgan Keegan in 2004 and arrived at Merrill in July 2010, according to BrokerCheck. The only marks on his record are his “employment separation” and the related customer dispute reported on December 29, 2017.

Are you a former client of Broker Chris Hibbard? If so, the broker fraud attorneys at the Sonn Law Group want to hear from you about your experience. Contact our office today for a free, no obligation review of you case.