A group of former Voya Financial Inc. employees sued the company this week, claiming the firm should not have included its own investment products in its 401(k) plan. 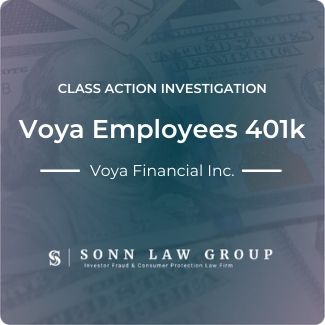 In the Dec. 14 complaint filed in federal court in Connecticut, the plaintiffs allege the company benefited at the expense of its own participants by selecting certain Voya investment options, rather than lower-cost alternatives with stronger performance records from other companies for the $2.2 billion 401(k).

“If Voya exercised its discretion to allocate retirement assets to its own mutual funds with the intent to benefit itself financially without properly weighing and/or using alternative, better-performing funds, then the beneficiaries may have a very good argument that Voya failed to act in the best interests of Voya employees and ex-employees in the 401k plan under federal law,” says Jeffrey Sonn, a nationally known securities attorney for investors harmed by mismanagement of investment accounts.

For example, the Voya Target Index Solution Trusts and several other investment options underperformed relative to peer investment options, the plaintiffs claim. The target-date series has had net returns lower than 25% to 45% of comparable products on the market since its launch in 2012, according to the complaint.

“These funds were not selected and retained for the plan as the result of an impartial or otherwise prudent process, but were instead selected and retained by defendants because they benefited financially,” the complaint read. “By choosing and then retaining the Voya Funds as a core part of the plan’s investments to the exclusion of alternative investments available in the 401(k)-plan marketplace, defendants enriched themselves at the expense of their own employees.”

The plaintiffs also point to the spread the company retained from the plan’s stable value option, which was consistently over 2% and brought $67 million in profits to Voya over the past few years, they stated.

According to the complaint, The company “has used its discretionary control over the crediting rate of the Voya Stable Value Option to increase Voya’s general account profits rather than pay plaintiffs…as well as the other plan participants increased retirement investing returns,”.

The lawsuit also makes claims related to other Voya investment options, as well as funds from Cohen and Steers and Brown Advisory. The plaintiffs also allege that the plan’s administrative costs were unreasonably high.

If you are a member of the Voya 401k plan, submit our short form to get information about joining the class-action lawsuit.