The Sonn Law Group has announced that a class action lawsuit has been filed against Conagra Brands (“Conagra” or the “Company”) alleging violations of federal securities laws. Specifically, the lawsuit is seeking remedies for class members under both the Securities Exchange Act of 1934 (the “Exchange Act”) and the Securities Act of 1933 (the “Securities Act”).

Who Is Eligible to Join the Class Action against Conagra Brands, Inc. (NYSE: CAG)? 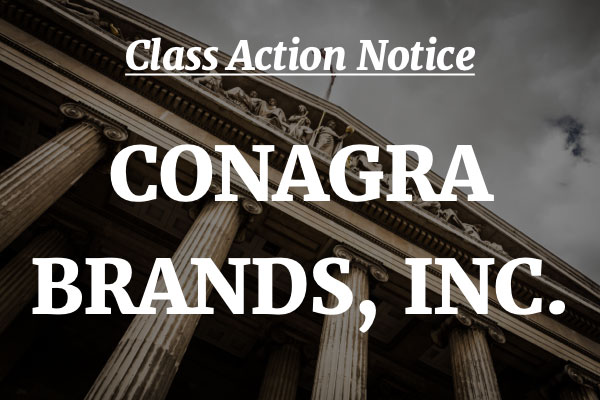 Under the Exchange Act claims, all persons or entities that purchased or otherwise acquired Conagra common stock from June 27, 2018 through December 19, 2018, inclusive, are eligible as class members.

Under the Securities Act claims, all persons or entities who purchased shares of Conagra’s common stock pursuant and/or traceable to the Company’s false and/or misleading registration statement, prospectus and prospectus supplement (the “Offering Documents”) issued in connection with the Company’s secondary public offering, commenced on or about October 9, 2018, for the sale of approximately 16.3 millions shares of Conagra common stock at $35.25 per share are eligible as class members.

What is Being Alleged?

Conagra manufactures and markets packaged foods for retail consumers, restaurants, and institutions. The Company has a portfolio of well-known food brands, including Reddi-wip, Hunt’s, Healthy choice, Slim Jim, and Orville Redenbacher’s. Conagra is based in Chicago, Illinois.

In June 2018, Conagra announced the acquisition of Pinnacle, another large publicly traded food service company, in a cash and stock transaction valued at approximately $10.9 billion (the “Transaction”). Conagra represented the merger as “a no brainer of a deal” and as a combination of two “growing portfolios.” The Company further represented that it had a “proven track record of executing strategic transactions” and that Pinnacle was “a portfolio of complementary, leading brands.”

In order to partially finance the Transaction, Conagra executed a secondary public offering of approximately 16.3 million shares of common stock, priced at $35.25 per share. The complaint alleges that the Offering Documents issued at this stage were materially false and/or misleading.

When Conagra released its third quarter 2018 results, it became clear that Pinnacle’s performance was much worse than the Company had indicated; Pinnacle’s three leading brands had “suffered sales and distribution losses” during that year, attributed to “self-inflicted subpar innovation and executional missteps.”

As a result of Conagra’s wrongful acts and omissions, the precipitous decline in the market value of the Company’s common stock, Plaintiff and other Class members have suffered significant losses and damages.