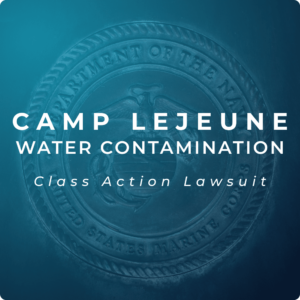 ATTN. MILITARY VETS & FAMILIES: If you were you on active duty or a resident at Camp Lejeune between 1953 and 1987, you may be eligible to recover significant financial compensation.

See if You Qualify

Quick Links: Compensation Eligibility Questionnaire | Overview of the Case | Am I Eligible? | Why Choose Sonn Law?

Sonn Law Group attorneys are representing people who have been harmed because of the contaminated public water supply at Camp Lejeune Marine Corps Base in North Carolina.

Complete the short questionnaire below to see if you are eligible to join the class action lawsuit and receive compensation for your suffering.

What Toxins Were Found in the Water Supply at Camp Lejeune?

The marines corps first discovered the existence of volatile organic compounds (VOCs) in the water supply at Camp Lejeune in 1982. But the water supply contamination began as early as 1953, and lasted through 1987. It’s thought that during that period millions of base workers, active duty marines, and their families were exposed to the toxic water supply.

According to the Agency for Toxic Substances and Disease Registry (ATSDR) most of the contaminated wells were removed from Camp Lejeune in 1985.

The specific toxins that were found in the Camp Lejeune public water supply are:

Exposure to TCE, VC, and Benzene are all classified as cancer-causing chemicals. TCE is classified as a probable carcinogen. In addition to cancer, being exposed to these chemicals can also lead to birth defects and other severe health problems.

Who is Eligible to Join the Camp Lejeune Class Action Lawsuit to Recover Damages?

The primary qualifications for joining the Camp Lejeune class action lawsuit – and recovering monetary damages – are:

If you’d like to speak with a qualified attorney about your specific situation and whether you may qualify for damages, we invite you to conact us anytime. Sonn Law Group is a nationwide leader in class action lawsuits. We will listen to you, answer your questions, and help you make the right choice.

Sonn Law Group is led by attorney Jeffrey Sonn who has over 30 years of experience helping victims of wrongdoing recover compensation for their losses. In addition to representing individuals in lawsuits against defendants, attorney Sonn has significant experience as lead counsel in class action lawsuits:

Sonn Law Group is a law firm committed to standing up for folks who’ve suffered because of negligence or wrongdoing. If you or someone you know is suffering devastating health consequences because of the contaminated water at Camp Lejeune, we want to help you.