The claimant is seeking $730K in damages for Stallones’s alleged misconduct. 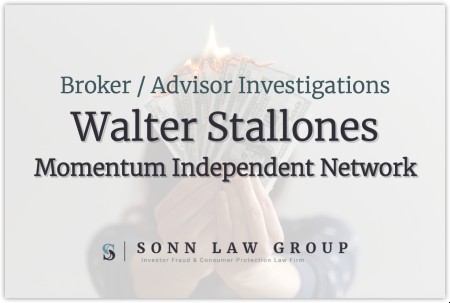 Walter “Leighton” Stallones (CRD: 433344) is currently registered as a broker with Momentum Independent Network, where he has been employed since 2010.

Stallones has four disclosures on his BrokerCheck report that occurred within the last 20 years.

May 2001 Employment Separation After Allegations

The Sonn Law Group is currently investigating allegations surrounding Walter Leighton Stallones. We represent investors in claims against negligent brokers and brokerage firms. If you or your loved one experienced investment losses, we are here to help. For a free consultation, please call us now at 866-827-3202 or complete our contact form.