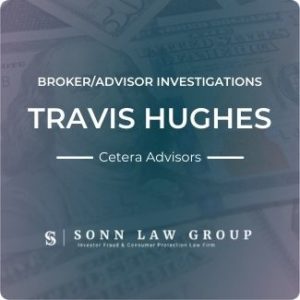 Hughes has eleven disclosures on his BrokerCheck report. Four customer disputes filed against Hughes were denied and one was dismissed.

Broker Comment: This is not a claim against the advisor. The advisor, Travis Hughes, is a non party. Client has numerous accounts/investments with healthy gains. All investments were suitable.

Claimants also allege that they were unfamiliar with the features of variable life insurance products and unaware that their value was dependent upon market performance. Claimants seek unspecified damages from multiple defendants. See comments section.

Broker Comment: While maintaining this claim’s lack of merit, a business decision was made to settle this matter for a nominal sum solely to avoid the time and expense associated with a protracted legal dispute. Matter settled for $10,000, with $4,500 paid by Axa and $5,500 paid by the representative.

Allegations: Failure to follow compliance policies and procedures while on enhanced supervision.

Allegations: Client alleges that the sale of three variable life insurance policies were unsuitable investments based on her financial objectives and background. Client is requesting to cancel the policies waiving surrender charges and to return all premiums with interest.

In addition, client is requesting the sum of $25,000, which represents damages incurred and an additional amount of $10,000 which represents work to be performed in relation to scheduling documentation concerning her divorce proceedings.

Broker Comment: The firm agreed to cancel the life insurance policies and refund the premiums paid minus the loans taken. In addition, the firm reimbursed the client an additional sum of $5,000 and legal fees incurred. As a result, the loss to the firm was $289,000.

Allegations: Client alleges he was advised to purchase a 1994 paid up variable life insurance policy for twenty thousand dollars that would provide a 150,000 death benefit.

Client further alleges that he was informed that his policy will terminate without value unless he continues to make payment. Client alleges this is not what he was originally told and would like the matter investigated and corrected. Damages are unspecified.

Broker Comment: The firm agreed to the return of the variable policy for cancellation. The agent did not contribute towards the settlement of the matter. Loss to firm: $25,000.00.

Allegations: Plaintiff alleges fraud, misrepresentation and breach of contract for products and services that were unsuitable for plaintiff’s needs. Damages unspecified.

Broker Comment: The matter was settled for $350,000. $280,000 of the amount was paid by RR Travis Hughes Errors and Omissions insurance carrier on his behalf.

The Sonn Law Group is currently investigating allegations surrounding Travis Jerome Hughes. We represent investors in claims against negligent brokers and brokerage firms. If you or your loved one experienced investment losses, we are here to help. For a free consultation, please call us now at 866-827-3202 or complete our contact form.