INVESTORS: Wells Fargo broker Todd Michael Hayse was named in a customer dispute alleging that he made unauthorized trades. 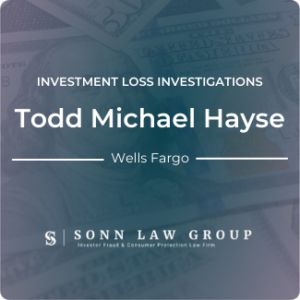 Hayse has two disclosures on his BrokerCheck report.

Allegations: The Customers allege unauthorized trading from May 2015 to August 2016.

Broker Comment: These accusations are inaccurate and completely false. I was not even employed by Merrill Lynch during the stated time frame of June 2016 – August 2016.

Allegations: The Customers allege failure to follow instructions from September 2015 to January 2016.

Broker Comment: This particular client and his family still work with me today. I have always had a great personal and business relationship with his family. This complaint had nothing to do with me. It was directly related to the actions of my former partner. I was only a part of the team at the time.

The Sonn Law Group is currently investigating allegations surrounding Todd Michael Hayse. We represent investors in claims against negligent brokers and brokerage firms. If you or your loved one experienced investment losses, we are here to help. For a free consultation, please call us now at 866-827-3202 or complete our contact form.