The Sonn Law Group is investigating allegations that Timothy Millis committed misconduct. If you or a family member has suffered losses investing, we want to discuss your case. Please contact us today for a free review of your case. 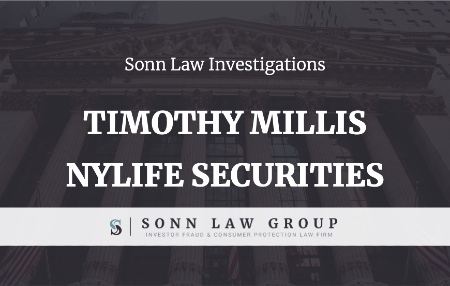 Timothy Millis (CRD#: 706959) consented to the sanctions and to the entry of findings that he recommended unsuitable short-term Class A mutual fund transactions to customers.

As a result of these short-term trades, the customers were charged approximately $174,725 in upfront sales charges. Half of the customers realized losses totaling approximately $33,391. Millis violated the reasonable-basis suitability obligation by recommending frequent trading in mutual funds without understanding the costs of those transactions.

Millis was ordered to disgorge $7,500 and suspended for three months.

According to his BrokerCheck report, Millis was also the subject of a customer dispute in 2019. In April 2019, he was named in a complaint stating that NYLife noted that from February 2017 through September 2018, a customer incurred front-end sales charges when proceeds from a variable annuity withdrawal were subsequently transferred to the customer’s brokerage account. The Firm also noted that the customer’s variable annuity withdrawal was subject to a surrender charge in February 2017. The customer executed a settlement agreement that the Firm provided to him after its review of the transactions. This matter was settled for $50,279.06.