The claimants accused Atyeo of negligence and breach of fiduciary duty, among other forms of misconduct.

The Sonn Law Group is investigating allegations that Timothy Atyeo recommended unsuitable investments in the energy sector. If you or a family member has suffered losses investing, we want to discuss your case. Please contact us today for a free review of your case. 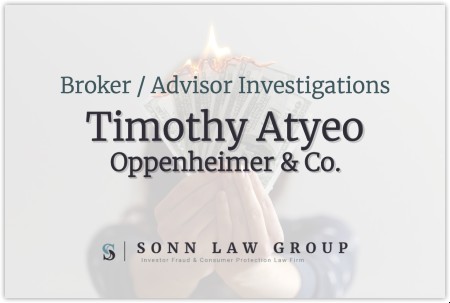 Timothy Atyeo (CRD#: 1544728) was named in a customer dispute alleging that he over concentrated a client’s portfolio and engaged in speculative trading in the energy sector between August 2011 and February 2019. The clients also alleged that Atyeo committed negligence, breach of fiduciary duty, and misrepresentation.

The dispute was brought in July 2019 and is still pending. The claimants are seeking $1.1 million in damages. In the broker comment, Atyeo stated, “I at all times conducted myself in an appropriate and professional manner. I deny all allegations of wrongdoing and intend to vigorously defend myself against the unwarranted and unsubstantiated allegations. Contrary to the spurious claims, Claimants experienced combined gains in their accounts over $1 million.

Despite claims by some brokers, the energy sector is a volatile market. When the supply of oil outnumbers the demand oil prices drop; an event that has occurred on multiple occasions in recent years. Investors whose portfolios are over-concentrated in the energy sector typically suffer significant losses.

Atyeo has three other disclosures on his BrokerCheck report.

The Sonn Law Group is currently investigating allegations that Timothy Atyeo recommended unsuitable investments in the energy sector. We represent investors in claims against negligent brokers and brokerage firms. If you or your loved one experienced investment losses, we are here to help. For a free consultation, please call us now at 866-827-3202 or complete our contact form.