Brown is accused of engaging in a Ponzi-like scheme with his investment fund.

The Sonn Law Group is investigating allegations that Steven Fitzgerald Brown engaged in fraud. If you or a family member has suffered losses investing, we want to discuss your case. Please contact us today for a free review of your case. 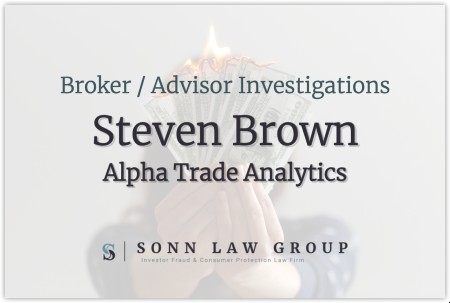 Steven Fitzgerald Brown (CRD#: 5876751) was charged by the SEC with fraud arising from his operation of investment pool Alpha Trade Analytics, Inc.

The complaint alleged Brown, the CEO, president, and sole owner and director of Alpha Trade, engaged in a Ponzi-like scheme using Alpha Trade’s investment fund. Additionally, Brown, as an investment adviser to the fund, allegedly raised approximately $7.5 million from more than 75 investors. Brown claimed he would invest the funds in financial markets and guaranteed investors a fixed-rate payout ranging from 8-12% per month. He’s also accused of falsely promising that the investments were safe and risk-free and that the fund would bear all losses.

Despite these claims, the complaint alleges that Brown operated the fund in a Ponzi-like fashion, investing less than 3% of the funds in financial markets and using new investor money to pay existing investors their returns. Brown allegedly misappropriated or misused investor funds for his benefit as well, according to the complaint.

The complaint charged Brown with violating the antifraud provisions of Section 17(a) of the Securities Act of 1933, Section 10(b) of the Securities Exchange Act of 1934 and Rule 10b-5 thereunder, and Sections 206(1), 206(2), and 206(4) of the Investment Advisers Act of 1940 and Rule 206(4)-8 thereunder. Without admitting or denying the allegations of the SEC’s complaint, Brown consented to the entry of a judgment imposing a permanent injunction, which is subject to court approval. The complaint also seeks the return of ill-gotten gains plus prejudgment interest and civil penalties to be determined by the court upon a motion filed by the SEC.

In a parallel action, the United States Attorney’s Office for the Central District of California announced on September 3 that it filed criminal charges against Brown arising from the same conduct alleged by the SEC.

The Sonn Law Group is currently investigating allegations that Steven Fitzgerald Brown committed fraud. We represent investors in claims against negligent brokers and brokerage firms. If you or your loved one experienced investment losses, we are here to help. For a free consultation, please call us now at 866-827-3202 or complete our contact form.