The Sonn Law Group is investigating allegations that Stephen Sloane recommended unsuitable investment strategies. If you or a family member has suffered losses investing, we want to discuss your case. Please contact us today for a free review of your case. 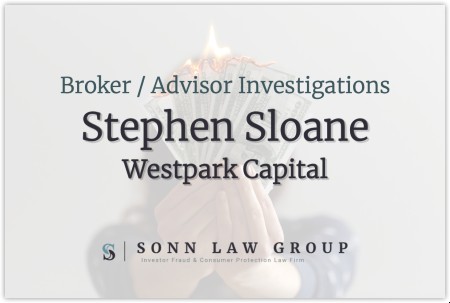 Stephen Sloane (CRD#: 1257601) is currently a broker with Westpark Capital in New York, NY where he has been employed since 2016. Sloane was recently named in a FINRA complaint alleging that he recommended an unsuitable investment strategy to retail customers.

The complaint alleged that Sloane recommended that customers engage in active, short-term trading of U.S. Treasuries with 10 and 30-year maturities without conducting reasonable diligence to understand the effect of the strategy’s cost on the customers’ potential returns. Thus, Slone did not have a reasonable basis to recommend the strategy.

Sloane allegedly received approximately $220,000 in compensation from implementing his strategy for the customers, representing his share of the $510,025 in markups and markdowns he charged to execute the trades for the customers. By contrast, after paying markups, markdowns, and other transactional service fees, the customers realized total trading losses, exclusive of interest, of $329,811, as a result of Sloane’s investment strategy. The complaint also alleged that Sloane charged excessive and unfair markups.

Sloane has six other disclosures on his BrokerCheck report.

The Sonn Law Group is currently investigating allegations that Stephen Sloane recommended an unsuitable investment strategy. We represent investors in claims against negligent brokers and brokerage firms. If you or your loved one experienced investment losses, we are here to help. For a free consultation, please call us now at 866-827-3202 or complete our contact form.