Strugano’s former firm filed a FormU5 stating that they were investigating allegations that he forged customer signatures.

The Sonn Law Group is investigating allegations that Shlomo Strugano forged signatures. If you or a family member has suffered losses investing, we want to discuss your case. Please contact us today for a free review of your case. 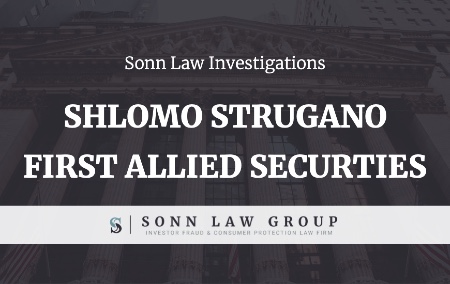 Shlomo Strugano (CRD#: 3108780)  consented to the sanction and entry of findings stating that he failed to appear and provide testimony requested by FINRA.

The testimony is in connection with an investigation into whether he had forged or falsified customer signatures and initials on account and transaction documents. Strugano was also named in multiple customer disputes during his final year at First Allied Securities.

In September 2019, a customer alleged that Strugano recommended several unsuitable investments and may have forged signatures on account documents. This matter is still pending.

In March 2019, a client alleged unauthorized transactions and poor performance. This matter is still pending.

In January 2009, Strugano was permitted to resign from Essex National Securities amid an investigation into allegations that Strugano used his personal email address to send unauthorized communications to members of the public.

The Sonn Law Group is currently investigating allegations that Shlomo Strugano forged customer signatures. We represent investors in claims against negligent brokers and brokerage firms. If you or your loved one experienced investment losses, we are here to help. For a free consultation, please call us now at 866-827-3202 or complete our contact form.