The Sonn Law Group is investigating allegations that Ryan Bowers committed misconduct. If you or a family member has suffered losses investing, we want to discuss your case. Please contact us today for a free review of your case. 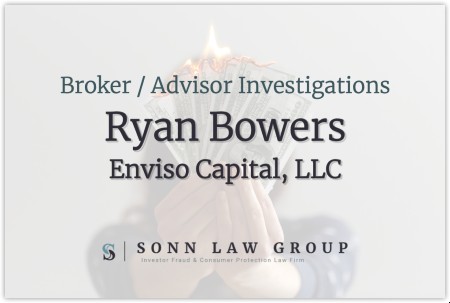 In July 2013, the SEC initiated public administrative and cease-and-desist proceedings against Bowers. In the administrative release, the SEC stated that between 2012 and 2014, Enviso Capital and two of its principals, Bowers and another individual, materially overstated the value of two private funds advised by Enviso Capital in financial statements sent to fund investors. In one case, Enviso Capital allegedly overvalued the fund’s primary asset – private company Bluefin Renewable Energy, LLC (“Bluefin”), by failing to use reasonable assumptions regarding projected revenues.

In the other, Enviso Capital failed to properly value a loan despite the fact that it was probable that the full outstanding amount would never be collected. In addition, due to the problems with the Bluefin valuation and the failure to properly value a loan from one of the private funds to the other, the funds’ financial statements were not prepared in accordance with Generally Accepted Accounting Principles (“GAAP”), which resulted in Enviso Capital violating the custody rule. Moreover, Enviso Capital made several misrepresentations regarding Bluefin’s progress toward developing a renewable energy project in management discussion and analyses (“MD&As”) sent to fund investors.

The other individual, a Principal of Enviso Capital, had a primary role in formulating the valuations and disclosures, which were then approved by Bowers, Enviso Capital’s Managing Principal. Enviso Capital also falsely disclaimed having custody of client assets in Form ADV filings that Bowers executed.

The SEC’s statement ended by stating that Bowers failed to timely conduct annual reviews of Enviso Capital’s compliance program. As a result of the conduct described above, Bowers willfully violated Sections 206(2), 206(4), and 207 of the Advisers Act and Rule 206(4)-8 promulgated thereunder. Based on the alleged violations, Bowers was barred from associating with a broker, dealer, investment adviser, municipal securities dealer, transfer agent, or NRSRO for an indefinite period, with the option to reapply to the SEC after a period of two years. Bowers was also fined $50,000.00.

Bowers has four other disclosures on his BrokerCheck report.

The Sonn Law Group is currently investigating allegations that Ryan Bowers committed misconduct. We represent investors in claims against negligent brokers and brokerage firms. If you or your loved one experienced investment losses, we are here to help. For a free consultation, please call us now at 866-827-3202 or complete our contact form.