Ferguson has been named in multiple customer disputes over the span of his 26-year career.

The Sonn Law Group is investigating allegations that Rodney Ferguson made unsuitable recommendations. If you or a family member has suffered losses investing, we want to discuss your case. Please contact us today for a free review of your case. 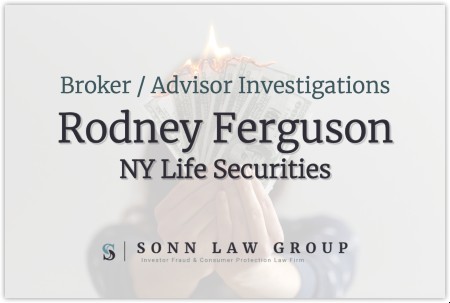 Rodney Stuart Ferguson (CRD#: 2482868) is currently registered as a broker and investment adviser with NY Life Securities, where he has been employed since 2000. Ferguson was previously registered with PFIC Securities, Magna Investments, and Cigna Financial Advisors. Ferguson has been in the financial industry since 1994.

Ferguson has six disclosures on his BrokerCheck report, one of which is a denied customer dispute.

The Sonn Law Group is currently investigating allegations that Rodney Ferguson made unsuitable recommendations. If you or your loved one experienced investment losses, we are here to help. For a free consultation, please call us now at 866-827-3202 or complete our contact form.