Korzik was suspended for a period of nine months and ordered to pay a fine based on his misconduct.

The Sonn Law Group is investigating allegations that Robert Korzik made unauthorized private securities sales.  If you or a family member has suffered losses investing, we want to discuss your case. Please contact us today for a free review of your case. 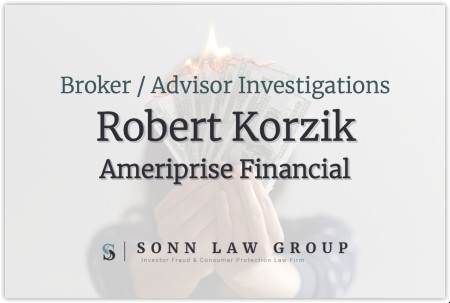 Robert Nicholas Korzik (CRD#: 1013350) was previously registered with Ameriprise Financial from 2011 until 2017. In October 2017, Korzik was discharged from Ameriprise Financial based on allegations that he committed, “company policy violations related to private securities investments.”

On March 26, 2020, Korzik signed a Letter of Acceptance, Waiver, and Consent. He consented to the sanctions in the form of a 9-months suspension and an $8,500 fine. He also consented to FINRA’s findings, which stated that Korzik personally invested $50,000 in a private securities transaction involving an energy company, and solicited and facilitated the purchase of approximately $550,000 of these securities by firm customers. Korzik received an email from a friend and chief executive officer (CEO) of an energy company. The email indicated that the company was seeking to raise money in a private offering and attached a copy of the company’s investor slide deck, private placement memorandum, and business plan.

The findings also stated that by using his firm email to distribute the email from the CEO and the attachments, Korzik failed to comply with FINRA’s content standards for communications with the public. The communications failed to provide a fair and balanced discussion of the risks associated with the investment, as they did not prominently disclose that the securities were speculative, illiquid, and subject to a high degree of risk. In addition, the communications failed to balance the discussion of the features and potential benefits of the offering with the corresponding risks.

The company’s business plan and investor deck omitted the assumptions used to derive the stated financial projections, and therefore did not provide a sound basis to evaluate the information. The business plan and investor deck also contained promissory or unwarranted claims regarding its business operations and objectives. Additionally, the email contained a forward-looking prediction estimating the per-share value of the company’s stock.

Noonan has one other disclosure on his BrokerCheck report.

The Sonn Law Group is currently investigating allegations that Robert Korzik made unauthorized private securities sales. We represent investors in claims against negligent brokers and brokerage firms. If you or your loved one experienced investment losses, we are here to help. For a free consultation, please call us now at 866-827-3202 or complete our contact form.