Robert Walberg is facing allegations that he ran a Ponzi scheme

The Sonn Law Group is investigating allegations that Robert Walberg committed misconduct. If you or a family member has suffered losses investing, we want to discuss your case. Please contact us today for a free review of your case. 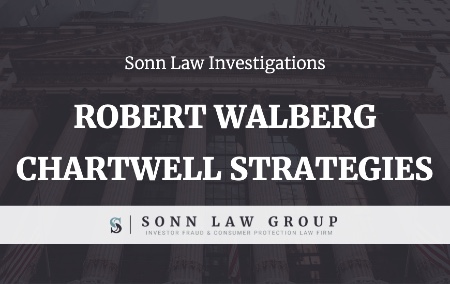 Robert Walberg, the creator of Chartwell Strategies, is facing multiple accusations in connection with his involvement in a Ponzi-like scheme. Walberg allegedly held himself out as a financial adviser, although he had no state license. Chatwell Strategies was also operating without a state license.

The Battaglia’s, Walberg’s aunt and uncle by marriage entrusted him with control over their retirement accounts in order to make investments. Instead, Walberg allegedly participated in his own Ponzi scheme.

Walberg allegedly controlled more than $5 million, appropriating about $2 million for his own personal expenses. Maria Battaglia stated that her retirement fund went down $19,800 in July, $6,000 in August, and $4,950 in September. She stated that Walberg had been the one to open the account for them. Instead of growing the Battaglias’ retirement money, Walberg allegedly shuffled it into a Chartwell Strategies account for his own personal use.

Prosecutors allege that Walberg operated a Ponzi scheme from 2014 until 2019, mostly preying on relatives. Another one of Walberg’s victims was Northwest Suburban Montessori School where Walberg served as the school board’s treasurer. Walberg allegedly embezzled over $600,000 from the school, where his children attended.