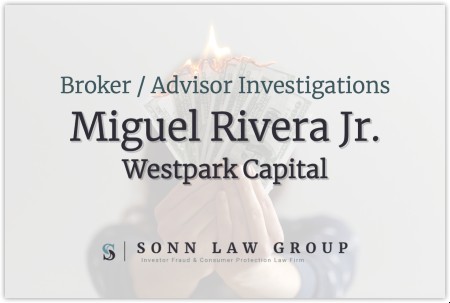 A new FINRA complaint has recently been filed against Rivera and his former firm, Westpark Capital, alleging that Rivera recommended unsuitable investments to an elderly couple, who entrusted Rivera with their irreplaceable retirement savings.

Despite the clients’ investment objectives and risk assessment, Rivera invested in risky, speculative investments that eventually resulted in significant losses for the clients. Erez Law, who claimed to have filed the dispute, stated that Rivera purchased the investments without obtaining the clients’ approval, thus engaging in unauthorized trading.

Rivera has four other disclosures on his BrokerCheck report.

The Sonn Law Group is currently investigating allegations surrounding Miguel Rivera Jr. We represent investors in claims against negligent brokers and brokerage firms. If you or your loved one experienced investment losses, we are here to help. For a free consultation, please call us now at 866-827-3202 or complete our contact form.