Catoggio faced allegations that he failed to implement a compliance program designed to detect and report suspicious activity.

The Sonn Law Group is investigating allegations that Michael Cattogio committed misconduct.  If you or a family member has suffered losses investing, we want to discuss your case. Please contact us today for a free review of your case. 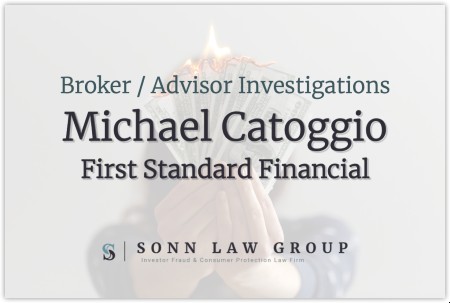 Michael Nicholas Catoggio (CRD#: 2402269) was formerly the CEO of First Standard Financial, a New Jersey-based broker-dealer, who recently had its registration in the state of New Jersey revoked after the firm failed to take reasonable action to curtail misconduct. In January 2020, the broker-dealer’s compliance officer, Michael Leahy, was barred by FINRA from associating with any FINRA member firm in any capacity. This was due to “significant supervisory failures” at First Financial.

FINRA’s findings stated that First Financial had “held itself out as a legitimate financial services firm,” but the firm actually “served as a haven for greedy, dishonest agents who traded clients’ accounts like sharks in a feeding frenzy.”

FINRA also barred two representatives from First Financial, Philip Sparacino and Gabriel Block, from associating with any FINRA member firm for engaging in what FINRA called a “fraudulent course of business that consisted of excessive, unsuitable, and frequently unauthorized short-term trading in customers’ accounts that generated commissions for First Standard and its agents at its customers’ expense.”

Catoggio is the most recent First Standard executive to face regulatory action from FINRA. Without admitting or denying the findings, Catoggio consented to the sanctions and to the entry of findings that he, as the AML compliance officer of his member firm, failed to establish and implement an AML compliance program reasonably designed to detect and cause the reporting of potentially suspicious activity relating to transactions involving the deposit and liquidation of low-priced securities.

Catoggio delegated the review of the exception report to the firm’s branch managers and regional supervisor. However, he did not provide any training to his designees regarding how to use the exception report alone or in conjunction with other accounts, trading and fund transfer information to flag potentially suspicious trading activity, and did not ensure that they had any understanding of how to monitor for suspicious trading in low-priced securities.

Catoggio failed to take reasonable steps to monitor the review so that it was effective, reasonably designed, and functioning as intended. In fact, when notified that branch managers were not performing their delegated reviews of the exception report, Catoggio did not take any action in response. As a result, Catoggio and the firm failed to detect and investigate red flags that suggested potentially suspicious activity in the accounts of customers that deposited low-priced securities, liquidated those shares, and immediately withdrew the proceeds.

The findings also stated that Catoggio failed to establish and maintain a supervisory system, including WSPs, reasonably designed to achieve compliance with Section 5 of the Securities Act of 1933. Catoggio failed to ensure that the firm had any system or procedures in place to avoid becoming a participant in unregistered sales of securities, despite being aware that firm customers frequently deposited stock certificates for low-priced securities in physical and electronic form.

Based on these findings, FINRA suspended Catoggio from acting in any principal capacity for a period of at least two months and ordered him to pay a fine of $5,000. Catoggio also agreed that in order to requalify as a General Securities Principal, he must retake the Series 24 examination and receive a passing score.

Catoggio has one other disclosure on his BrokerCheck report.

The Sonn Law Group is currently investigating allegations that Michael Catoggio committed misconduct.  We represent investors in claims against negligent brokers and brokerage firms. If you or your loved one experienced investment losses, we are here to help. For a free consultation, please call us now at 866-827-3202 or complete our contact form.