INVESTORS: Former Windsor Street Capital broker Michael Alejandro Castillero was named in a lawsuit filed by the SEC alleging that he, as well as other defendants, operated a Ponzi-like scheme. 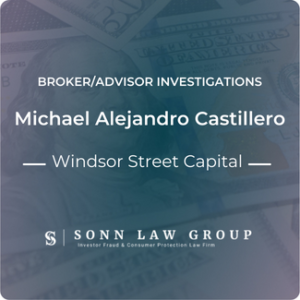 Allegations: Plaintiff Securities and Exchange Commission, for its Complaint against Defendants StraightPath Venture Partners LLC (the “SP Fund Manager”), StraightPath Management LLC (the “SP Adviser”), Brian K. Martinsen (“Martinsen”), Michael A. Castillero (“Castillero”), Francine A. Lanaia (“Lanaia”), and Eric D. Lachow (“Lachow”) (collectively, “Defendants”), alleges that from November 2017 through February 2022, Defendants raised at least $410 million from more than 2,200 investors. In exchange for their investments, investors received securities-interests in a subdivision (“Series”) of one of nine private investment funds (an “SP Fund”). Through both written materials and their vast network of sales agents, Defendants represented to investors that their investments would be directed to a specific Series that purportedly owned a specific number of shares of a specific private company that had the potential to undertake an initial public offering (“Pre-IPO Shares”). Defendants then told investors that their investment corresponded to a specific number of Pre-IPO Shares held by that Series. In essence, Defendants pitched the investment as a way for retail investors to own potentially lucrative, difficult-to-find Pre-IPO Shares that could not yet be purchased on a public stock exchange. Contrary to these representations, however, Defendants often were unable to obtain the number of Pre-IPO Shares they either claimed to already have or needed to back the interests they sold to investors. Rather than return the money investors paid them, Defendants kept it for themselves and continued to solicit new investors. Defendants also repeatedly told investors that each Series would be kept separate from all other Series, thus protecting their investments from losses from another Series backed by other Pre-IPO Shares that were less profitable. Instead, Defendants freely commingled investor funds, frequently transferring monies invested in one SP Fund to other SP Funds or to the SP Fund Manager in order to make purchases of Pre-IPO Shares or Ponzi-like payments back to earlier investors who wanted their money back. Defendants profited handsomely from their fraudulent scheme. Even as they told investors they were charging no upfront fees (or had waived the fees they could have charged), Martinsen, Castillero, Lanaia, and Lachow paid themselves more than $75 million and their sales agents nearly $48 million. Defendants also concealed from investors the continuing roles of Castillero and Lanaia, who were effectively barred from the brokerage industry but who operated behind the scenes to run the SP Funds and further the fraud. When the Commission staff sought copies of the emails of sales agents during its investigation, Castillero and Martinsen intentionally deleted them to avoid implicating themselves. In addition to the fraud, Defendants violated the securities and broker-dealer registration provisions of the securities laws. None of the interests in the SP Funds were registered with the Commission and no exemption from registration applied to these securities offerings because, among other reasons, Castillero was barred from the brokerage industry. Defendants ran an unregistered broker-dealer through their use of sales agents who were not licensed brokers and to whom they paid commissions. As a result of the conduct described in this Complaint, Castillero violated Sections 17(a), 5(a), and 5(c) of the Securities Act, Sections 10(b) and 15(a) of the Exchange Act and Rule 10b-5 thereunder, and Sections 206 and 207 of the Advisers Act and Rule 206(4)-8 thereunder. In addition, Castillero is liable for aiding and abetting the SP Fund Manager’s and the SP Adviser’s violations of Securities Act Sections 5(a), 5(c), and 17(a), Exchange Act Sections 10(b) and 15(a) and Rule 10b-5 thereunder, the SP Adviser’s violations of Advisers Act Sections 206 and 207 and Rule 206(4)-8 thereunder, and Lachow’s violations of Exchange Act Section 15(a).

Allegations: Without admitting or denying the findings, Castillero consented to the sanction and to the entry of findings that he refused to appear for on-the-record testimony requested by FINRA in connection with its investigation into allegations that he engaged in unauthorized trading in a customer’s account at his member firm, made payments in an attempt to settle the customer’s complaint regarding the trades without notifying the firm, and made false statements regarding this conduct to FINRA.

Allegations: Unauthorized trades and Rep tried to set up a repayment plan directly with the customer, did not follow through and left the business.

Broker Comment: I deny the allegations. All trades were suitable and appropriate. The case was settled to avoid the expense of litigation.

Broker Comment: The customers did not mention that his son in law [third party] was the broker that opened and handled the account.

Allegations: On 08/12/2015 I received a written complaint from [customer] claiming unauthorized transactions/churning. On 08/31/15 I received a retraction from [customer], he also stated that he wished to continue working with Mr. Castillero. On 09/01/15, I interviewed [customer], while reviewing his complaints they were all found to be false. [Customer] also stated that he wrote the complaint because he was angry due to the decline of his stocks.

If you have any information about Michael Alejandro Castillero that you would like to share or discuss, please call our firm for a confidential consultation. We represent investors in claims against negligent brokers and brokerage firms. If you or your loved one experienced investment losses, we are here to help. For a free consultation, please call us now at 866-827-3202 or complete our contact form.