Leonard Kinsman, Formerly of Wells Fargo, Barred by FINRA for Refusing to Appear for Testimony

Kinsman’s testimony was requested by FINRA in connection with its investigation into the events leading to Kinsman’s termination from Wells Fargo.

The Sonn Law Group is investigating allegations that Leonard Kinsman committed misconduct. If you or a family member has suffered losses investing, we want to discuss your case. Please contact us today for a free review of your case. 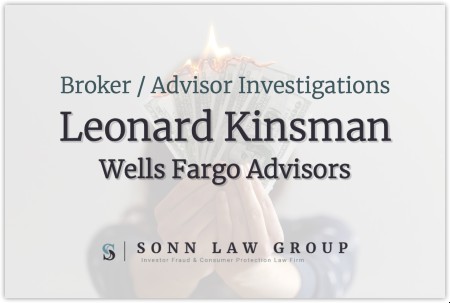 Leonard Kinsman (CRD#: 2816535) was previously registered with Wells Fargo Advisors from 2014 until 2019. On July 4, 2019, Wells Fargo filed a Uniform Termination Notice for Securities Industry Registration (“Form U5”) stating that Kinsman had been discharged for unprofessional conduct. Based on this information, FINRA opened an investigation into the conduct that led to Kinsman’s termination.

On April 23, 2020, FINRA sent Kinsman a request for on-the-record testimony pursuant to FINRA Rule 8210. Kinsman acknowledged the request and stated that he would not appear for testimony. Kinsman was subsequently barred from association with any FINRA member firm based on his refusal.

Kinsman has five other disclosures on his BrokerCheck report.

The Sonn Law Group is currently investigating allegations that Leonard Kinsman committed misconduct. We represent investors in claims against negligent brokers and brokerage firms. If you or your loved one experienced investment losses, we are here to help. For a free consultation, please call us now at 866-827-3202 or complete our contact form.