Bosh alleged fraud, breach of contract, and failure to supervise, among other violations.

The Sonn Law Group is investigating allegations that Jeffrey Wiseman committed misconduct. If you or a family member has suffered losses investing, we want to discuss your case. Please contact us today for a free review of your case. 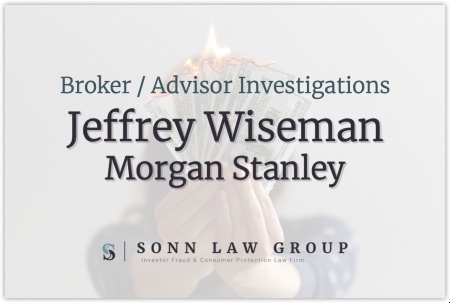 James Wiseman (CRD#: 2012653) was employed by Morgan Stanley from 2009 until 2015 when he was discharged based on allegations that he shared his password and failed to complete firm-mandated training.

Chris Bosh alleged fraud, breach of contract, and failure to supervise, among other things, related to his allegedly being refused access to his Morgan Stanley accounts. He sought damages in excess of $1 million. The two claims were eventually consolidated by FINRA. Last week, the FINRA arbitration panel awarded three Morgan Stanley accounts to Chris Bosh and ruled that his mother’s name be removed from them. The arbitrators then denied all of the claims brought by the parties.

Wiseman made a request that the arbitration be expunged from his record, but this request was denied.

The Sonn Law Group is currently investigating allegations that Jeffrey Wiseman committed misconduct. We represent investors in claims against negligent brokers and brokerage firms. If you or your loved one experienced investment losses, we are here to help. For a free consultation, please call us now at 866-827-3202 or complete our contact form.