Dixson is accused of recommending alternative investments that were unsuitable for his elderly clients.

The Sonn Law Group is investigating allegations that Jeffrey Dixson recommended unsuitable investments in GPB Capital funds. If you or a family member has suffered losses investing, we want to discuss your case. Please contact us today for a free review of your case. 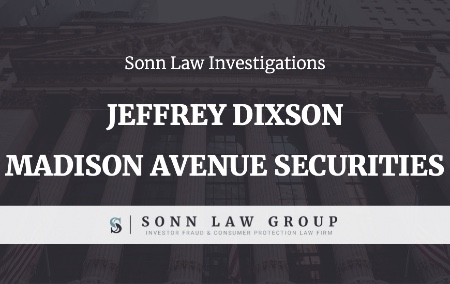 Jeffrey Dixson has been subject to seven customer complaints and one regulatory action during the course of his career. The four most recent complaints, all filed in 2019, allege that Dixson made unsuitable investment recommendations between the period of 2011 and 2017.

One client specifically alleged that various alternative investments were unsuitable. Two of the claims alleged elder abuse on the part of Dixson. The claims are seeking between $150,000 and $650,000.

Dixson also faced a customer dispute in 2015 in which the client alleged poor recommendations and poor advice were given by Dixson. The matter was settled for $140,000.

In 2007, Dixson was fined by the State of Washington, Office of the Insurance Commissioner for selling unapproved variable annuities and falsely representing that the annuity applications were signed out of state.

GPB Capital is embroiled in litigation amid allegations of being a Ponzi scheme. The company is being investigated by the SEC, FBI, and other state agencies. In November 2019, GPB told investors that the long-awaited financial audit had no projected release date.

The Sonn Law Group is currently investigating allegations that brokers recommended unsuitable investments in GPB Capital funds. We represent investors in claims against negligent brokers and brokerage firms. If you or your loved one experienced investment losses, we are here to help. For a free consultation, please call us now at 866-827-3202 or complete our contact form.