UPDATE: On November 2, 2021 James Seijas was been barred by FINRA for failure to cooperate with their investigation into his alleged involvement in a $33M ponzi scheme.

The Sonn Law Group is investigating allegations that James Seijas participated in a Ponzi scheme If you or a family member has suffered losses investing, we want to discuss your case. Please contact us today for a free review of your case. 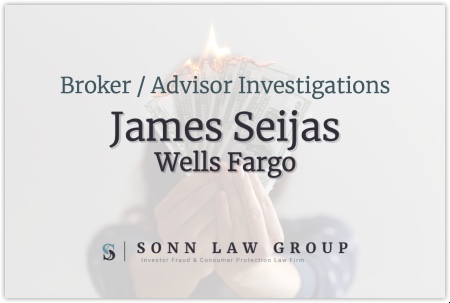 James Seijas (CRD#:2392901) was named in a class-action lawsuit against a Wells Fargo subsidiary, claiming that Seijas allegedly defrauded 150 investors out of $35 million through a Ponzi scheme with Q3 Trading Club.

The Q3 Trading Club was created by Seijas, along with Quan Tran, a certified surgeon, and Michael Ackerman, former broker for UBS Securities. The Q3 Trading Club was allegedly used to pool investor funds in order to trade crypto assets using a “proprietary algorithm” that helps generate profits by trading cryptocurrencies.

The Club encouraged investors, many of whom were doctors known by Tran, to participate by depositing funds. According to public records, the Q3 Trading Club raised $1 million, then became a limited partnership. It then gained $33 million from 150 investors all across the US. Despite these investments, the plaintiffs alleged that only about $10 million was invested in cryptocurrencies, with the rest going to the founders.

The plaintiffs claim that Wells Fargo should have monitored Seijas’s activity, as required by their policy that requires employees to regularly report activities stemming from outside interests. Wells Fargo allegedly did not inquire into Seijas’s role at Q3 during that time.

The filing also states, “[d]espite Defendants’ representation to potential and existing Q3 Investors that their virtual currency trading was highly successful and that Q3 Investors were free to withdraw the profits earned in their accounts after one year, Defendants did not trade virtual currencies successfully and most of Q3 Investors’ money was misappropriated or lost in trading.”

A majority of the funds were apparently spent on personal expenses. Seijas and his wife allegedly spent $3.5 million of investor funds on a house in Florida. Tran allegedly bought a yacht for $1.4 million and Tiffany jewelry for $100,000.

The plaintiffs accused Wells Fargo, Seijas, Tran, and Ackerman of fraud, negligence, and unjust enrichment. The Q3 founders are also accused of conspiracy to commit fraud and negligent misrepresentation. Wells Fargo is also charged with one count of vicarious liability.

Seijas has one disclosure on his BrokerCheck report.

The Sonn Law Group is currently investigating allegations that James Seijas participated in a Ponzi scheme. We represent investors in claims against negligent brokers and brokerage firms. If you or your loved one experienced investment losses, we are here to help. For a free consultation, please call us now at 866-827-3202 or complete our contact form.