The SEC alleges that Brewer sold over $100,000 in stock in advance of an announcement that caused the stock price to fall.

The Sonn Law Group is investigating allegations that Jack Brewer engaged in insider trading. If you or a family member has suffered losses investing, we want to discuss your case. Please contact us today for a free review of your case. 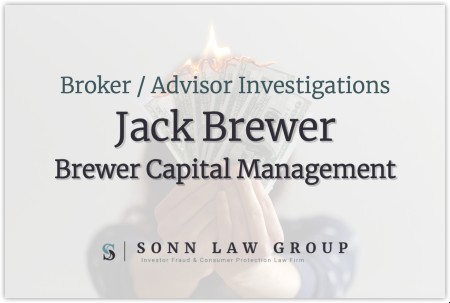 Jack Brewer (CRD#: 5391749) was registered as an investment adviser for Brewer Capital management from December 2013 until November 2017. On August 6, 2020, Brewer was named by the SEC in a complaint alleging that he committed insider trading in the securities of COPsync, Inc., when he sold over $100,000 of COPsync stock in advance of a company announcement that caused the stock price to drop.

The SEC alleges that Brewer was the owner and control person of both a registered investment adviser, Brewer Capital Management (“BCM”), and a related consulting firm, Brewer Group Inc. Brewer consulted for COPsync, where he obtained material, nonpublic information about COPsync’s plans to do a stock offering. According to the complaint, Brewer participated in the offering, and the purchase agreement contained a clause obligating him not to sell any shares of the company prior to the announcement of the offering.

Despite his obligations to the company to maintain confidentiality and not to use the confidential information for his own benefit, on January 4 and 5, 2017, he allegedly sold his shares at prices ranging from $1.01 to $1.16 per share, for proceeds of approximately $104,000, before the company announced that it had issued over 1.77 million shares of stock (including warrants to purchase additional shares) in a private offering at an average price of $0.65 per share. Selling his shares prior to the press release allowed Brewer to profit by approximately $35,000 more than he would have had he waited to sell his shares after COPsync issued its press release.

The complaint also alleges that, despite Brewer’s regular access to materially nonpublic information by the terms of his consulting agreements, BCM failed to modify and enforce written policies and procedures to prevent the misuse of such information, and Brewer aided and abetted this violation. Further, the complaint alleges that during a two-year period, Brewer unlawfully acted as a securities broker without being associated with a broker-dealer or being registered as a broker with the SEC.

The complaint charges Brewer with violating the antifraud provisions of Section 10(b) of the Securities Exchange Act of 1934 and Rule 10b-5 thereunder and the broker-dealer registration provision of Section 15(a) of the Exchange Act, and with aiding and abetting BCM’s violations of Section 204A of the Investment Advisers Act and Rule 204A-1 thereunder. The SEC seeks a permanent injunction, disgorgement with prejudgment interest, a civil penalty, and a penny stock bar.

Brewer has no other disclosures on his BrokerCheck report.

The Sonn Law Group is currently investigating allegations that Jack Brewer engaged in insider trading. We represent investors in claims against negligent brokers and brokerage firms. If you or your loved one experienced investment losses, we are here to help. For a free consultation, please call us now at 866-827-3202 or complete our contact form.