The unauthorized business activity allegedly was related to the Woodbridge Ponzi scheme.

The Sonn Law Group is investigating allegations that Imran Razvi was involved in the Woodbridge Ponzi scheme. If you or a family member has suffered losses investing, we want to discuss your case. Please contact us today for a free review of your case. 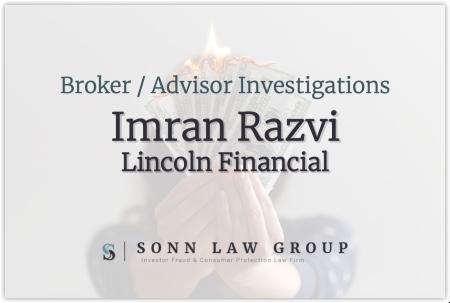 Imran Razvi (CRD#: 3042006) was fined $5,000 and suspended for six months by FINRA, set to begin on March 16, 2020. Razvi signed a letter of acceptance, waiver, and consent. FINRA’s findings stated that he engaged in an outside business activity notwithstanding that his member firm denied his request to do so.

The findings stated that Razvi sought approval to use a company he formed to refer investors to a purported real-estate investment fund. Razvi’s firm denied his request and notified him that he could not accept compensation or consideration for referrals to the fund.

Contrary to the denial, his company’s agents referred investors to the fund and in exchange for these referrals, the agents received commissions. The commissions the agents earned were paid to the company. Razvi, through his ownership of the company, received a portion of those commissions. Later, the fund filed a voluntary Chapter 11 bankruptcy petition.

The SEC had formerly discovered that Woodbridge operated as a Ponzi scheme from July 2012 until approximately December 2017. In October 2019, former Woodbridge CEO Robert Shapiro was sentenced to 25 years in federal prison for leading the $1.22 billion fraud scheme that caused more than 8,000 investors to suffer losses.

October 2018: The customer alleged that Razvi recommended an unsuitable investment and failed to disclose the risks of the investment. The matter was settled for $32,514.05.

April 2018: The customer alleged that Razvi recommended an unsuitable investment and failed to disclose the risks of the non-registered investment. The matter was settled for $67,485.95.

The Sonn Law Group is currently investigating allegations that Imran Razvi was involved in a Ponzi scheme. We represent investors in claims against negligent brokers and brokerage firms. If you or your loved one experienced investment losses, we are here to help. For a free consultation, please call us now at 866-827-3202 or complete our contact form.