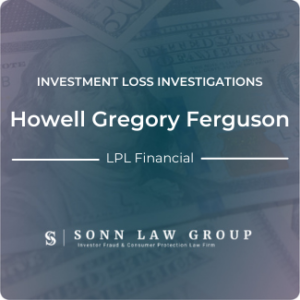 Ferguson has two disclosures on his BrokerCheck report.

Allegations: Without admitting or denying the findings, Ferguson consented to the sanctions and to the entry of findings that he forged documents by signing a customer’s name without the customer’s prior permission. The findings stated that the forms were to request required minimum distributions from annuities and Ferguson caused those forms to be submitted to the annuity companies. The findings also stated that after FINRA initiated an investigation of Ferguson’s conduct, he falsely denied signing the customer’s name in response to FINRA’s request for information. Subsequently, after FINRA obtained Ferguson’s emails about the forms, and requested information from him about those emails, Ferguson recanted his false statements and admitted that he had signed the customer’s name without permission.

Allegations: Customers allege that between February 2014 and November 2021, they were recommended two alternative investments that were unsuitable.

The Sonn Law Group is currently investigating allegations surrounding Howell Gregory Ferguson. We represent investors in claims against negligent brokers and brokerage firms. If you or your loved one experienced investment losses, we are here to help. For a free consultation, please call us now at 866-827-3202 or complete our contact form.