The broker was accused of misrepresentation and unsuitable recommendations.

The Sonn Law Group is investigating allegations that Hannah Peterson Weber committed misconduct. If you or a family member has suffered losses investing, we want to discuss your case. Please contact us today for a free review of your case. 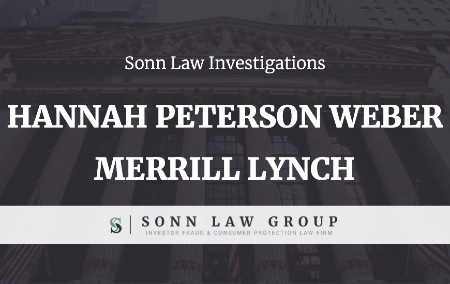 Heather Weber Peterson (CRD#: 2911524) has been registered with Merrill Lynch since 2006. She has seven settled or pending customer complaints listed on her BrokerCheck report. Most recently, a customer dispute was filed against her in September 2019 based on allegations that Weber recommended unsuitable investments and made material misrepresentations.

Another client alleged that Weber recommended unsuitable investments and made material misrepresentations from August 2012 until July 2014. This matter was settled for $95,000. Two months later in May 2017, a client filed a complaint against Weber alleging that she recommended unsuitable investments and made misrepresentations from February 2012 until June 2014. This matter was settled for $92,500.