Newport Coast Securities has since been expelled by FINRA.

The Sonn Law Group is investigating allegations that Gregory McCloskey committed misconduct. If you or a family member has suffered losses investing, we want to discuss your case. Please contact us today for a free review of your case. 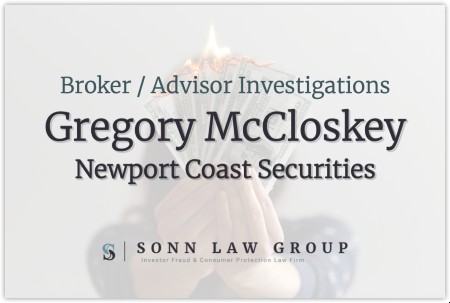 On December 1, 2020, McCloskey was named in a complaint filed by FINRA alleging that he participated in two undisclosed private securities transactions (PSTs) involving a customer, who was an elderly, retired widow, and then sought to conceal these transactions from his member firms and FINRA.

FINRA’s complaint alleges that McCloskey solicited the customer to purchase $20,000 in shares of stock of a company without disclosing the transaction to his member firm. The customer’s investment in the company took place outside the regular “course or scope” of McCloskey’s employment with the firm. The customer’s investment in the company eventually surfaced because she sent a written complaint to McCloskey at his firm business address about her investment.

The customer’s complaint prompted McCloskey to participate in a second PST. To appease the customer and further attempt to conceal his misconduct, McCloskey also arranged to have his sister purchase the customer’s $20,000 investment in the company’s stock. McCloskey failed to disclose this PST to his firm as well.

In connection with FINRA’s investigation that led to a previous AWC, FINRA requested that McCloskey provide a list of all firm customers who invested in the company, whether or not he participated in the purchase. McCloskey provided FINRA with a signed response to the request in which he identified three of his firm customers by name as the only firm clients who made their own direct investments in the company.

Finally, the complaint alleges that McCloskey falsely responded to four questions on a personal activity questionnaire that his firm submitted to FINRA. McCloskey misled FINRA on the questionnaire by falsely attesting that while associated with a member firm he had not received any complaints against him from a customer during the past 12 months, utilized a third-party communication system, such as a third-party email address to communicate with customers, engaged in any PSTs, prepared and distributed personalized account statements, consolidated statements or performance reports separate and apart from the account statements prepared and distributed by his member firm.

Furthermore, the complaint alleges that McCloskey falsely stated on his annual compliance questionnaire that he had not solicited, sold, or participated in any PSTs during the past 12 months.

The complaint is still pending. Schmitz has three other disclosures on his BrokerCheck report.

The Sonn Law Group is currently investigating allegations that Walter McCloskey committed misconduct. We represent investors in claims against negligent brokers and brokerage firms. If you or your loved one experienced investment losses, we are here to help. For a free consultation, please call us now at 866-827-3202 or complete our contact form.