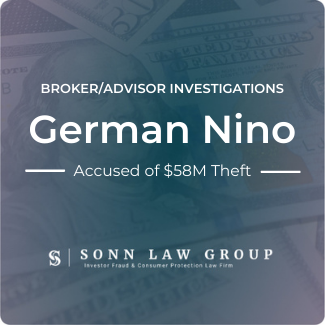 INVESTORS: German Nino is accused of stealing 5.8M from an investment client over a 6 year period. The SEC’s complaint alleges that Nino used a large portion of the stolen money to buy gifts for several women with whom he had romantic relationships.

According to FINRA’s Brockercheck report, Nino faced a customer dispute in July of 2020, while working for UBS Financial, seeking $2M in damages over allegations of theft. The client was ultimately awarded a nearly $6M settlement.

If you or someone you know has trusted German Nino (CRD# 2653707) with your money, and you have suffered losses, contact Sonn Law Group anytime to discuss your situation and your options for financial recovery.

Worried about your investments with German Nino ?
Submit the short form below to schedule a free consultation.

What are the Specific Allegations Made Against German Nino in the SEC Complaint?

Below is the text from introduction section of the SEC’s complaint regarding Weston Florida Financial Advisor German Nino:

1. This case concerns a multi-year fraud by German Nino (“Nino”), a registered representative and investment adviser representative associated with UBS Financial Services Inc. (“UBS”), a financial services firm dually-registered with the Commission as a broker-dealer and an investment adviser. Between May 2014 and February 2020, Nino stole approximately $5.8 million from a long-standing advisory client.

2. As part of this scheme, Nino represented to the client that he would invest the client’s funds in securities, but, instead, Nino used the funds for personal expenses primarily
gifts and travel and living expenses for women with whom he had romantic relationships. Nino also used a portion of the stolen funds to fully repay another client from whom he had previously misappropriated funds.

3. To conceal his fraud, Nino created and provided the client with fictitious account statements purporting to show the client’s investment portfolio and related balances, when in fact the accounts had significantly smaller balances. Nino also manipulated UBS’s records to ensure that the client did not receive notifications for wire transfers out of one of the client’s accounts. To effectuate larger fraudulent transfers, Nino forged the client’s signature on letters of authorization.

4. By engaging in the conduct described herein, Nino directly violated numerous anti fraud provisions of the federal securities laws as described in more detail below. The Commission seeks injunctive relief, disgorgement and prejudgment interest, and civil penalties against Nino.