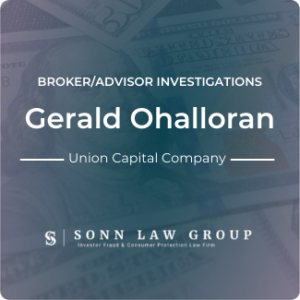 Allegations: Failing to observe high standards of commercial honor and equitable principles of trade, failure to report an outside business activity, and failure to update Form U-4

Broker Comment: On September 20, 2018, the Office of Financial Regulation entered a Final Order adopting the Stipulation and Consent Agreement in the matter of Gerald O’Halloran. Mr. O’Halloran neither admitted nor denied the findings but consented to the entry of findings by the Office. The Office found that Gerald O’Halloran failed to maintain his firm’s branch office blotter and signed incomplete customer trading authorization documents. Pursuant to the Final Order, Mr. O’Halloran agreed to cease and desist from all present and future violations of Chapter 517, F. S. and the administrative rules thereunder; and to pay an administrative fine in the amount of $4,000.00.

Broker Comment: Client fully understood the risks and rewards offered by UDF IV and was satisfied with the investment until recently, when UDF IV became the subject of a rumor of fraudulent activity. Trading was halted while regulatory authorities investigated. UDF has fully cooperated with the investigation, which has so far resulted in no findings of any such activity. It is anticipated that trading will resume in mid-September.

Allegations: Customer alleges unauthorized trades in the account during February 2011. Client discovered the trades in March 2011.

Broker Comment: [Customer] was present and agreed to all transactions done in her account. When the stock [went] down – she came in months later asking me to make good for the losses out of my own pocket-which I would not do. She threatened to sue and ruin my reputation in the small community.

Allegations: Alleged unauthorized transactions. Customer was seeking reimbursement of transaction losses in excess of $5,000 from one trade. Final settlement amounted to $8,646.30

Broker Comment: Bought 150 SH. S-1 Corp (SONE) 3/29/2000 @ 92 ($13,939). Trade confirm reflected S-1 Corp. Client was confused. I reminded her that was same stock we agreed on as (SONE) symbol. Okay! Almost daily discussions regarding entire portfolio. Met in office 4/12 & 5/4. Reviewed analyst reports. Stock down with high tech market, but she was happy with forecast and agreed to keep SONE. Sell when loss recovered. Client reacts to every TV report. Against our advice, including manager, she sold $15,000 of MFD, Class A shares, owned only two months, to buy latest fad stock.

May 2000 Employment Separation After Allegations

Broker Comment: Client letter not given to manager. The letter confirmed an adjustment to her account. My shared assistant handed me the letter Thursday, May 11, 2000. A short time prior to my leaving the office for a 4-day Rotary conference. I assumed she gave a copy to the manager as that was the established procedure. I should have assumed this responsibility myself.

If you have any information about Gerald James Ohalloran that you would like to share or discuss, please call our firm for a confidential consultation. We represent investors in claims against negligent brokers and brokerage firms. If you or your loved one experienced investment losses, we are here to help. For a free consultation, please call us now at 866-827-3202 or complete our contact form.