Bardeche is suspended for a period of nine months and ordered to pay a fine of $10,000.

The Sonn Law Group is investigating allegations that Angel Bardeche made unsuitable trades. If you or a family member has suffered losses investing, we want to discuss your case. Please contact us today for a free review of your case. 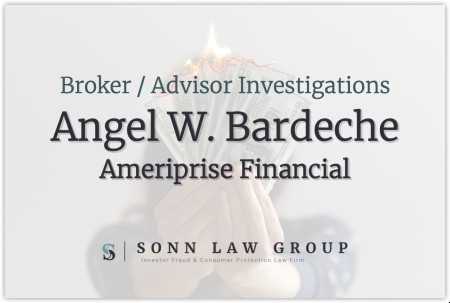 Angel Wynette Bardeche (CRD#: 4698117) was previously employed as a broker with Ameriprise Financial Services from 2012 until 2019. Bardeche signed an Acceptance, Waiver & Consent consenting to FINRA’s sanctions in the form of a nine-month suspension, a $10,000 fine, and disgorgement of ill-gotten gains in the form of $5,000.

Bardeche also consented to FINRA’s findings that she recommended and effected an unsuitable strategy in recommending that her customers effect a pattern of switching of Class A mutual fund shares, including short-term liquidations.

Bardeche did not have a reasonable basis to believe that this recommended pattern of switching and short-term liquidations of mutual fund Class A shares was suitable for her customers. FINRA also stated that Bardeche exercised discretion by effecting trades in non-discretionary customer accounts, without prior written authorization from the customers and without prior written approval by her member firm.

Bardeche has five other disclosures on her BrokerCheck report.

The Sonn Law Group is currently investigating allegations that Angel Bardeche made unsuitable trades. We represent investors in claims against negligent brokers and brokerage firms. If you or your loved one experienced investment losses, we are here to help. For a free consultation, please call us now at 866-827-3202 or complete our contact form.