Shaw was named in a dispute seeking $350,000 in damages over alleged unsuitable investments in GPB Capital.

The Sonn Law Group is investigating allegations that Christopher Shaw recommended investments in GPB Capital Holdings. If you or a family member has suffered losses investing, we want to discuss your case. Please contact us today for a free review of your case. 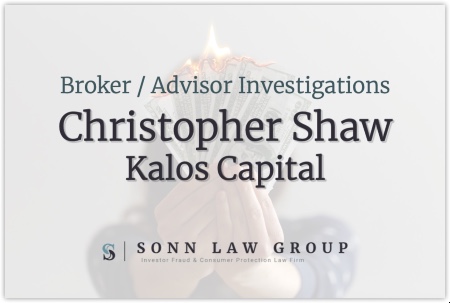 Christopher Shaw (CRD#: 5011382) is currently employed by Pruco Securities in Charlotte, North Carolina. Previously, he was registered with Kalos Capital in Belmont, North Carolina from September 2011 until May 2019.

According to his BrokerCheck report, Shaw was the subject of two customer disputes in 2019. The most recent was filed in November of 2019. The client alleged breach of fiduciary duty and unsuitable investments. The client is seeking $350,000 in damages. The matter is still pending.

In July 2019, Shaw was named in an additional customer dispute. In that dispute, the client alleges unsuitable investments in alternative securities between November 2012 and May 2017, while Shaw was employed with Kalos Capital. This client is seeking $450,000 in damages and the matter is still pending.

On March 3, 2020, the law firm of Shepherd, Smith, Edwards & Kantas (“SSEK”) filed a GPB fraud case on behalf of an elderly investor who suffered losses over $250,000. The claimant, who is in her seventies and works in a nursing home, stated that she had no prior investing experience. She trusted Shaw, first while he was at Kalos Capital, and continued to do so when he moved to Pruco Securities, to handle her retirement savings. She made it clear to shaw that she needed liquidity and did not want to take risks that could lead to the loss of her savings.

According to the claimant, Shaw represented himself as an expert in conservative investments and told her that he would employ a “conservative risk strategy” when handling her funds. Despite these assurances, he used an aggressive strategy which included allocating her assets and concentrating her entire portfolio in private placements, including $250,000 in GPB funds – GPB Holdings II and GPB Waste Management.