Kulch was named in a civil action brought by the Massachusetts Securities Division.

The Sonn Law Group is investigating allegations that Charles Kulch over-concentrated clients’ portfolios. If you or a family member has suffered losses investing, we want to discuss your case. Please contact us today for a free review of your case. 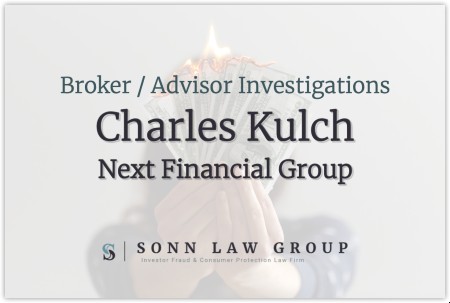 Kulch has six disclosures on his BrokerCheck report since 2010.

The Sonn Law Group is currently investigating allegations that Charles Kulch over-concentrated portfolios. We represent investors in claims against negligent brokers and brokerage firms. If you or your loved one experienced investment losses, we are here to help. For a free consultation, please call us now at 866-827-3202 or complete our contact form.