Mazliach was named in a FINRA complaint alleging that he committed misconduct.

The Sonn Law Group is investigating allegations that Bryan Mazliach made excessive and unsuitable trades. If you or a family member has suffered losses investing, we want to discuss your case. Please contact us today for a free review of your case. 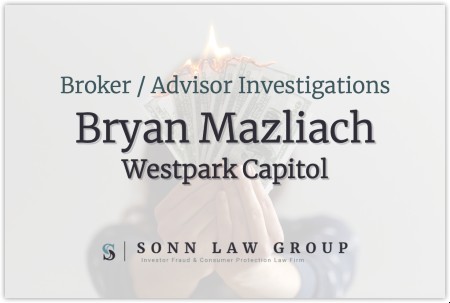 Bryan Mazliach (CRD#: 5518438) was registered as a broker with Westpark Capital from 2017 until 2018. In September 2020, Mazliach was named as respondent in a FINRA complaint alleging that he conducted excessive and unsuitable trades in five customers’ accounts by employing a high-cost, in-and-out trading strategy.

The complaint alleges that the recommended investment strategy lost customers over $170,000, while generating commissions and fees for the firm and Mazliach of more than $187,000.

Mazliach allegedly effected 450 trades, hundreds of which were unauthorized, in these five customers’ accounts. Mazliach’s trading resulted in annualized cost-to-equity ratios ranging from 37% to 218% and annualized turnover rates ranging from 12 to 50. These trades, when taken together, were excessive and quantitatively unsuitable for the customers based upon their investment profiles.

The complaint also alleges that Mazliach compounded his misconduct by engaging in unauthorized trading in his customers’ accounts. In total, he placed 420 unauthorized trades in ten accounts, seven of which were also excessively traded. The complaint further alleges that during FINRA’s investigation into Mazliach’s trading activity, he failed to respond to FINRA’s requests for documents and information.

Mazliach has four disclosures on his BrokerCheck report.

The Sonn Law Group is currently investigating allegations that Bryan Mazliach made excessive and unauthorized trades. We represent investors in claims against negligent brokers and brokerage firms. If you or your loved one experienced investment losses, we are here to help. For a free consultation, please call us now at 866-827-3202 or complete our contact form.