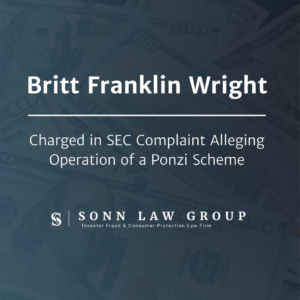 Wright has three disclosures on his BrokerCheck report. Two customer disputes filed against Wright were denied.

Allegations: Plaintiff, the United States Securities and Exchange Commission (“Commission” or “SEC”), for its Complaint against Michael Mooney (“Mooney”), Britt Wright (“Wright”), and Penny Flippen (“Flippen”)- the Defendants in this case – alleges that for more than a decade, John Woods (“Woods”) ran a massive Ponzi scheme, raising over $100 million from more than 400 investors nationwide to invest in Horizon Private Equity, III, LLC (“Horizon III”).

In August 2021, the SEC charged Woods and Southport with multiple counts of securities fraud for operating Horizon as a Ponzi scheme. Many of the defendants’ clients were elderly and inexperienced investors who communicated that they wanted safe investment opportunities for their assets, a large percentage of which were earmarked for retirement.

Nevertheless, the defendants, who each received undisclosed compensation from Horizon, recommended that their clients invest in the fund based solely on Woods’ unsubstantiated claims about Horizon’s investment objectives, source of returns, and operations. The defendants also allegedly ignored significant red flags, such as Woods instructing the defendants not to use their Southport email addresses when communicating about Horizon.

The complaint also states that the defendants falsely told their clients that Horizon would use the funds they invested to purchase safe investments; that Horizon would pay them a guaranteed rate of return; and that they could get their principal back without penalty.

In reality, Horizon earned very few profits from investments, and investor proceeds were used primarily to make principal and interest payments to earlier Horizon investors and to fund Woods’ personal projects, such as his purchase of a minor league baseball team. As a result of her conduct alleged in the complaint, Wright, engaged in acts or practices, or aided and abetted, and, unless restrained and enjoined by this Court, will continue to engage in acts and practices that constitute and will constitute, or will aid, abet and cause violations of Sections 17(a)(1), 17(a)(2), and 17(a)(3) of the Securities Act of 1933; Section 10(b) of the Securities Exchange Act of 1934 and subsections (a), (b), and (c) of Rule 10b-5 thereunder; and Sections 206(1) and 206(2) of the Investment Advisers Act of 1940.

If you have any information about Britt Franklin Wright that you would like to share or discuss, please call our firm for a confidential consultation. We represent investors in claims against negligent brokers and brokerage firms. If you or your loved one experienced investment losses, we are here to help. For a free consultation, please call us now at 866-827-3202 or complete our contact form.