Frank has been the subject of two other customer disputes over his career, both of which were settled.

The Sonn Law Group is investigating allegations that Brian Frank made misrepresentations and recommended unsuitable investments. If you or a family member has suffered losses investing, we want to discuss your case. Please contact us today for a free review of your case. 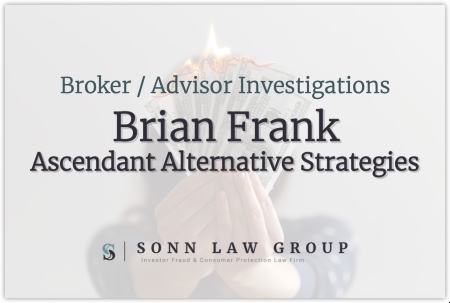 Brian Frank (CRD#: 1487350) has been employed with Ascendant Alternative Strategies in Austin, Texas since October 2017. Previously, he was registered with Tripoint Global Equities in Jericho, New York.

Frank was named in a FINRA arbitration action along with his employer, in which Steeler Capital, LLC, asserted suitability and misrepresentation claims against both parties. According to Frank’s BrokerCheck profile, Ascendant and Frank deny the allegations and plan to vigorously defend against them.

In July 2009, Frank was named in a customer dispute alleging that he violated Rule 2010 and failed to “observe high standards of commercial honor and equitable principles of trade.” The dispute was settled for $150,000. Frank was also the subject of a customer dispute in March 1990. The client alleged that Frank and another broker made misrepresentations regarding the sale of a “new issue, over the counter stock.” The matter was settled for $470,500.

Ascendant Capital, Frank’s member firm, is an alternative investment firm that exclusively distributes GPB products. In October 2019, the law firm Kirby McInerney LLP announced that it had filed a class-action lawsuit against GPB Capital Holdings in federal court. They also stated that GPB’s lead underwriters and distribution agents, including Ascendant Capital and Ascendant Capital Strategies, who assisted in the private placement offerings of GPB’s limited partnership funds, were named in the lawsuit.

Among other allegations, some of the claims made against the defendants include that they: (1) made materially misleading statements and failed to disclose material information in the offering documents and subsequent communications concerning the nature of the Funds’ businesses and distributions, the actual value of the investments, and the significant conflicts of interest of David Gentile and Jeffry Schneider, the principals of GPB and Ascendant, respectively; and (2) failed to properly register the Fund offerings and underlying securities or make required disclosures, as they were required to do given the circumstances of the offerings.