Engstrom was suspended for three months and ordered to pay a $5,000 fine.

The Sonn Law Group is investigating allegations that Brian Engstrom made unsuitable trades. If you or a family member has suffered losses investing, we want to discuss your case. Please contact us today for a free review of your case. 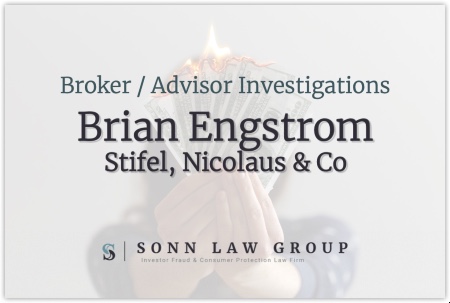 Brian Douglas Engstrom (CRD#:1838926) consented to the sanctions of a three-month suspension and to the entry of findings that he engaged in an unsuitable pattern of short-term trading of unit investment trusts (UIT) in customer accounts.

The findings stated that Engstrom recommended his customers roll over UITs more than 100 days prior to maturity on approximately 1,000 occasions. On more than 500 occasions, Engstrom recommended that his customers roll over a UIT before its maturity date in order to purchase a subsequent series of the same UIT that generally had the same or similar investment objectives and strategies as the prior series.

Engstrom’s recommendations caused his customers to incur unnecessary sales charges, and were unsuitable in view of the frequency and cost of the transactions. Engstrom’s customers received reimbursement of these excess sales charges from his member firm in connection with FINRA’s separate settlement with the firm. Engstrom was also ordered to pay a $5,000 fine.

Engstrom has three other disclosures on his BrokerCheck report.

The Sonn Law Group is currently investigating allegations that Brian Engstrom made unsuitable trades. We represent investors in claims against negligent brokers and brokerage firms. If you or your loved one experienced investment losses, we are here to help. For a free consultation, please call us now at 866-827-3202 or complete our contact form.