The Sonn Law Group is investigating allegations that Bradley Reifler committed fraud. If you or a family member has suffered losses investing, we want to discuss your case. Please contact us today for a free review of your case. 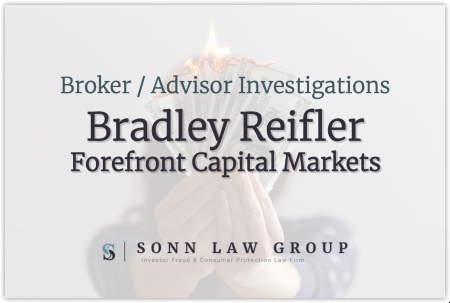 Bradley Reifler (CRD#: 1589414) was named in an SEC complaint filed on March 12, 2020. In the complaint, the SEC alleged that Reifler’s fraudulent conduct began when he raised $6 million from an investor and then misappropriated those funds.

Specifically, Reifler raised $6 million from a Nevada-Chartered trust company (“Nevada-Chartered Company”) by representing that an entity that he controlled would use the funds to provide short-term financing to telecommunications companies.

Instead, Reifler misappropriated the $6 million and used the funds to support real-estate development projects in which he had an interest and purchase the rights to manage the investments of a reinsurance trust with a $34 million portfolio of assets (“Reinsurance Trust”). The Reinsurance Trust held the assets for the benefit of a North Carolina life insurance company and was required to hold sufficient assets and to manage them so the insurance company could pay life insurance claims as they become due.

When it was discovered that Reifler had improperly invested the Reinsurance Trust’s assets in illiquid and highly risky investments, Reifler forged documents and counterparty signatures to conceal the true nature and value of the Reinsurance Trust assets and make it appear that he had, in fact, invested the assets properly. Reifler transferred millions of dollars of investor money to the Relief Defendants, all of which he owned or controlled. Each of the Relief Defendants received illicit proceeds from Reifler’s fraud to which they have no legitimate claim.

As a result of these frauds, Reifler and the Relief Defendants improperly received more than $16 million of ill-gotten gains and forced a North Carolina life insurance company into receivership because of its inability to pay policyholder claims. Reifler’s conduct in connection with the Nevada-Chartered Company violates the Securities Act and Exchange Act, and his conduct with respect to the Reinsurance Trust violates the Securities Act, the Exchange Act, and the Advisers Act.

Reifler has violated, and unless restrained and enjoined will continue to violate Section 10(b) and Rule 10b-5 of the Exchange Act, Section 17(a) of the Securities Act, and Sections 206(1) and 206(2) of the Advisers Act.

The SEC is requesting that the Court enter an order enjoining Reifler from further violations of these provisions and from participating in the issuance, purchase, offer, or sale of any security, except in his own personal account; requiring Reifler to pay disgorgement and prejudgment interest thereon on a joint and several basis with the Relief Defendants; and requiring Reifler to pay third-tier civil penalties, since he acted fraudulently and created substantial losses.

Reifler has five other disclosures listed on his BrokerCheck report.

The Sonn Law Group is currently investigating allegations that Bradley Reifler committed fraud. We represent investors in claims against negligent brokers and brokerage firms. If you or your loved one experienced investment losses, we are here to help. For a free consultation, please call us now at 866-827-3202 or complete our contact form.