Alexander James, Formerly of Voya Financial, Suspended for One Year Over Alleged Unapproved Outside Business Activity

James allegedly formed and incorporated a company and failed to report such information to his member firm.

The Sonn Law Group is investigating allegations that Alexander James engaged in unapproved outside business activity. If you or a family member has suffered losses investing, we want to discuss your case. Please contact us today for a free review of your case. 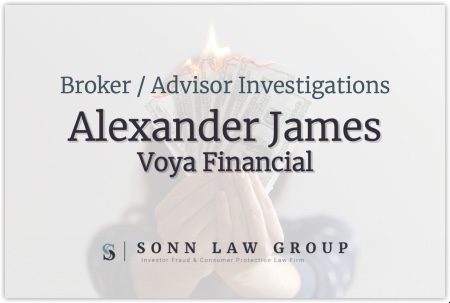 Alexander Jon James (CRD#: 5630825) was suspended for one year and fined $10,000 by FINRA after consenting to the findings that he engaged in an outside business activity without providing prior written notice to his member firm.

The findings alleged that in January 2013, James and two other individuals, who were not associated with any member firms, formed and incorporated a company that charged users a monthly subscription fee for access to a website that subscribers could use to seek funding for various projects or ventures (the “Company”). During the relevant period, James helped run the day-to-day operations of the Company and assisted in business development and marketing. For his work, James was paid a total of $16,000.

James accepted and consented to FINRA’s findings and to the imposition of a one-year suspension and a fine of $10,000.

James has one other disclosure on his BrokerCheck report.

The Sonn Law Group is currently investigating allegations that Alexander James engaged in outside business activities. We represent investors in claims against negligent brokers and brokerage firms. If you or your loved one experienced investment losses, we are here to help. For a free consultation, please call us now at 866-827-3202 or complete our contact form.